The Sickening History of Medicine

The Sickening History of Medicine books  are published at Lerner Books publishing.  It is a series who will take the readers through the history of medicine, using fascinating and sometimes gruesome illustration to describe ancient epidemics, early remedies, and the scientific discoveries that broght us to where we are today.

I have received four titles from this series. 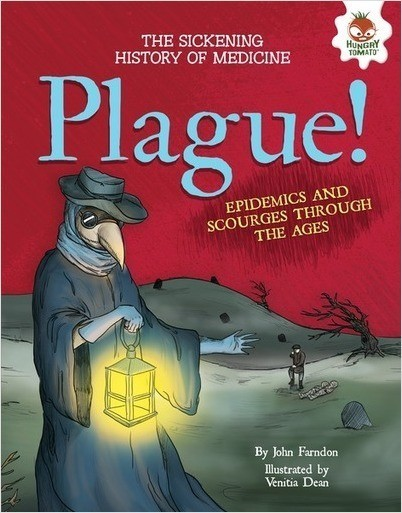 Plague! Epidemic and Scourge Through the Ages

Being sick is horrible but it used to be worse.  Inside this book, you will see evidence of the plagues of the past- rotting skin, dissolving lungs, and sinister swelling all over the body. Diseases like the Black Death wiped out whole towns and villages.  Tuberculosis consumed young people like a bloodsucking vampire.  Smallpox left its victims scarred for life - if they survived.  At the time, no one knew where these killer diseases came from or how to treat them.  Eventually, doctors discovered how these diseases and others were spread.  Being sick isn't quite as sickening as it was in the past. 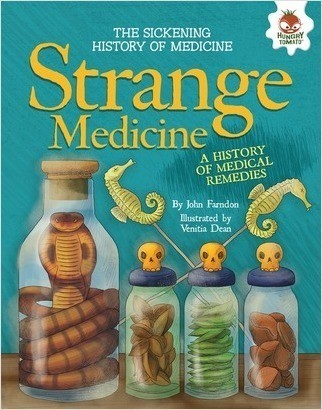 It is easy to take a pill when we aren't feeling well.  But did you know that the art of making medicines goes back thousands of years?  Early remedies weren't always so easy - or effective.   Some seemed downright disgusting.  Wine infused with a venomous snake was used to cure fatigue and hair loss.  Snail slime soothed burns, and a mixture of ear wax and mud treated headaches.  Discover more about how medicine was practiced centuries ago and how, eventually, scientists discovered some truly amazing remedies, from the magic bullet that treated syphilis to the insulin used for diabetes. 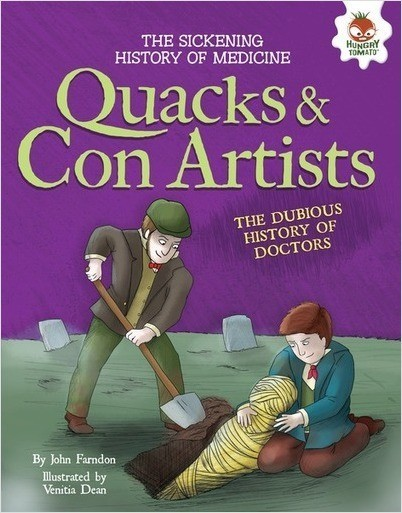 People have always needed doctors. But the doctors of the past might not look like the doctors you are used to seeing!  Sometimes their healing methods were weird, disgusting, or even dangerous.  Doctors in the Middle Ages sniffed patients' urine to diagnose disease, and barbers might cut off a person's injured arm or leg.  The ancient Chinese fought smallpox by blowing powdered pus up the nose.  Many of these old remedies turned out to be dangerous, but others paved the way for modern blood transfusions, vaccines, and anesthetics.  If you're not too squeamish, read this book to learn more about the history of doctors. 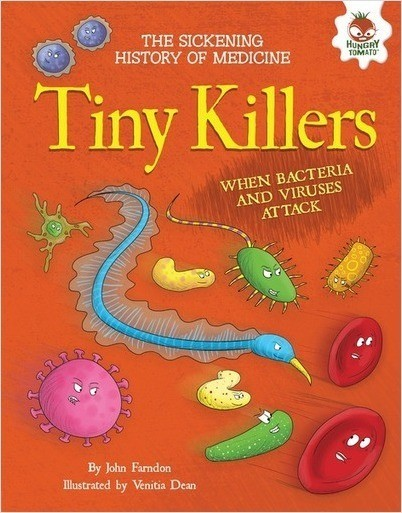 Invisible microbes cause sickness by invading our bodies and multiplying.  But doctors didn't always know that sickness was caused by germs.  Most people thought diseases came from smelly, damp air.  But over time, those ideas changed.  A Dutch scientist saw bacteria through his microscope.  Doctors realized that when they washed their hands, fewer people died.  And a doctor in London recognized that disease could spread through contaminated water.  Because of these discoveries, people eventually learned that hygiene was the key to stopping disease.  Hospitals used clean surgical instruments, and cities developed trash removal and sewage systems.  Learn more about the discovery and defeat of bacteria!

The books are beautifully illustrated and contain fascinating information. The information found is short and direct.   It is easy to read in one sitting or for reading assignments.   I think they would make great starting reference book for a science assignment.  I would recommend to also investigate other source of information as well.

The drawings are well made and fun to look at.  These books are designed with late elementary children in mind. They are fun to read and look at.  Below are examples of pages found in each of the books.

The books end with a timeline and a glossary for definitions.  This series is geared for grades 3 to 6 children and is packed with interesting information about medicine.   If you have a child who is interested in science particularly medicine, these would be a great series to explore.

This series can  be found at your favorite bookstore.

Disclaimer: Thanks to Thomas Allen and Lerner Publishing Group for sending me these books for review purposes.  I was not monetarily compensated for this review.  Please note that the review was not influenced by the Sponsor in any way.  All opinion expressed here are only my own.

Posted by Canadianladybug at 8:16 AM No comments: 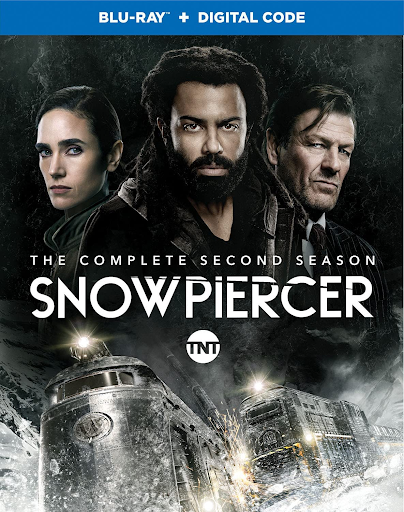 Snowpiercer - The Complete First Season
Synopsis
As Season One ended, so did the revolution, with Layton emerging as Snowpiercer's leader and another threat to the survivors fast approaching in the form of a rival train.
In Season Two, Mr. Wilford arrives, bringing a secret from Melanie's past.  A new power struggle emerges causing a dangerous rift as people are divided between their loyalties to Layton and to Mr. Wilford, who has a new train, new technology and a game plan that keeps everyone guessing.  While Layton battles Wilford for the soul of Snowpiercer, Melanie leads the charge over a shocking new discovery that could change the fate of humanity.
My Thoughts

I enjoy watching apocalyptical movies and television series with my husband and children. It allows us to debate on what if scenarios of multiple sorts.   Whether we like it or not, I think it is good for our brain to think of how we would react and survive if something dramatic would happen on our planet.

Let me remind you that this series is a reboot of a film,    The series follows the passengers of the Snowpiercer, a moving train that circle around the globe, after the planet became a frozen world.   The series deal with various themes like class warfare, social injustice and politics during a time of survival.

A series like this is great to stir interesting discussions with your teenagers I find.  There is so much we could glean from the episodes and the themes explored.

This BluRay contains a digital code as well as special features that are linked to the arrival of Mr. Wilford.

The series  was renewed for a third season which will premiere in January 2022 and has already been renewed for a fourth season.  Keep your eyes on this series as I think we will see more new twists and turns in Snowpiercer.

Disclaimer: Thanks to Falkowitz PR for sending me this book for review purposes.  I was not monetarily compensated for this review.  Please note that the review was not influenced by the Sponsor in any way.  All opinion expressed here are only my own.

Posted by Canadianladybug at 10:08 AM No comments: 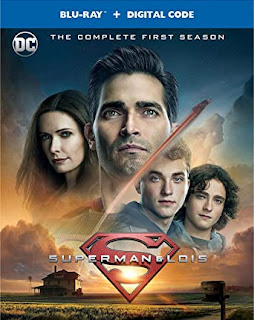 I will admit something - we do not have cable television for what seems like forever.   We simply rely on Netflix, Disney+, AppleTV+ and Amazon Prime.

So I did not know about the television series entitled Superman & Lois.  Yes, I know, chocking when it comes to a family who usually follow all television shows and movies from either Marvel or DC.   (We are behind on some of these television shows as we do not have cable... but we do watch them.)

Anyhow, when I had the opportunity to promote the release of the Complete First Season of Superman & Lois in both Blu-Ray and DVD, I jumped on the opportunity.   Even my husband was unaware of this television series.

So this American superhero drama is based on the DC Comics characters Superman and Lois Lane and the series is set in the Arrowverse which means it share the continuity with the other television series of the franchise.

This is a brand new television series which premiered on February 2021 - in the midst of the pandemic.   A second season was ordered and should premiere in early 2022.

Premise: Clark Kent/Superman and Lois Lane return to Smallville with their sons, Jonathan and Jordan, where they are reacquainted with Lana Land, her husband Kyle Cushing and their daughter Sarah.   Their idyllic lives are upended when The Stranger enters as well as the secret experiments of Morgan Edge.

The Blu-Ray contains all 15 episodes from the first season in high definition as well as a digital code (US only).   The 15 episodes are:

The special features included are:
One thing is for sure is that we are looking forward to watch this television series that we were not aware existed as soon as we have some time to do so.
This Blu-Ray and DVD television series, which is released on October 19th 2021,  is available at your favorite store even on Amazon.
Amazon CANADA
Amazon US

Disclaimer: I have received this DVD from Warner Bros, Home Entertainment and Falkowitz PR.  I was not monetarily compensated for this review.  Please note that the review was not influenced by the Sponsor in any way. All opinions expressed here are only my own.

Posted by Canadianladybug at 8:16 AM No comments: