I now have a niece!   Horray.   After a couple of years of wait it is now official.   My brother-in-law and his wife signed the papers to adopt a little girl they were caring for.

She is a cute little girl that is fitting so well in the family.   Welcome sweetheart.   We love you!

Posted by Canadianladybug at 8:30 AM No comments:

Email ThisBlogThis!Share to TwitterShare to FacebookShare to Pinterest
Labels: Fun and Exciting

5 years ago, you entered the world and since then you are a delight.   You brighten the room with your marvelous smile.    I love you and I wish you a marvelous birthday.    You are planning to go play mini-putt with your dad and brothers later this afternoon and look forward for your gifts....    You are excited with the cake I made for your birthday party and I am glad that you like it.   Pirate theme it is....  ARRRRG! 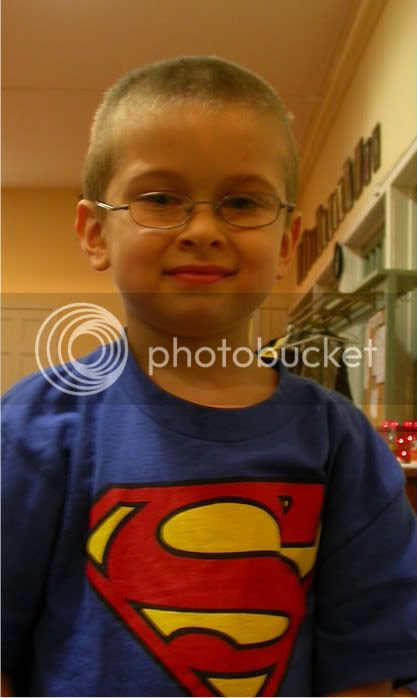 ... when we least expected it, we got a phone call from friends in AB.   Roger and Margie were pastor and wife of a church in Fredericton last year.  Now they live in Alberta.    We met more than 2 years ago in Cochrane, AB during an orientation session at the denomination where our churches would be link to.   Back then it was known as the CCSB now it's the CNBC but we are still southern-baptist.

So 2 years ago we met and we clicked.   Us 30 something kids and them older folks.   We lost contact but found each other at the CCSB convention in PEI last year.   We reconnected as though we haven't lost contact - you know what I mean?   It was so nice to see them and be able to stay at their place for a few days afterwards (yes they invited us to stop and stay a little while).   They babysat our kids while we went to see the new Hulk movie back then - a must for my husband.   We had a good time with them and were sad to leave Fredericton but we had to go back home...  Now my kids had another set of grand-parents...

Anyhow, Margie called to chit chat and it was nice to hear her voice.   She went through a lot in the Fall with strokes and she is back on her feet with no residual problems.   But she called to encourage us and it meant a lot for us because sometimes planting a church can be difficult.   And she is so loving as doing so.   Both of them are doing great and I'm very happy to hear that.

Now I wish we could visit more easily but Alberta is not next door.   Hubby says it will take a lot of convincing to drive there.   My point is simple - you drive there with the RV going through Canada, and you come back via the US.   Obviously, we would have to go to Vancouver to see hubby's sister and her family...  but how many times in your life could you do that.

So I am praying that someday we can do it... bring the kids out west, discover the plains and the mountains, if we are debt free and we have enough contracts to cover the cost.   This can't be done in one month - not with the amount of sight-seeing I like to do *grin*...

Hey, a girl can dream... and ask God to provide.   After all doesn't the scripture says: "Ask and you shall receive."?   So Lord I ask.   Please make my dream a reality some day.

yes we have one of those... even though it is not the one we first thought it would be.

At first, we thought Alexandre would be it just because of when he was a baby, he walked at 11 months.   Ah!   Totally not...  He is our golden retriever who cares for people.   He is sensitive to the bone that kid.  Sweet like a peach.   Oh sure he is competitive but not strong will.  Alexandre is easy to teach.  You give him a few pages and he takes off and go do it.

Then we though it was Dominic... after all he decided to walk at 9 months but now I don't think so.   Dominic is my drama king.  When something happens to him, watch out!    We had to bring him to see the doctor to get rid of warths and he was kicking and yelling so much because it hurt.     Him - it's revenge.  We work on this to tell him that it's not always about hitting back.   Don't take me wrong it's not always like that only when he is really mad...  Dominic needs to have something in his hands when I am teaching him (well except when he needs to write then the toy goes next to him).   His attention span is short and he loves to move.

Then came Jérémy.   My rocker... He loves to rocks on the sofa, in the bed to fall asleep and yes he is still doing it at 3 years old.   Hubby was like that as well as some aunts of his - they don't rock anymore.   Jérémy like to push the buttons to see if we will do what we say.  For example, if he doesn't finish his supper, no dessert...   These days he took the habit to not finish his food...  Which drives me nuts but he knows it drives me nuts so I try not to react.   If he doesn't finish his breakfast, I don't give him a snack in mid-morning until he finishes it.   I think he is getting it....  So I have became a bit more creative for toilet training as he doesn't care.   He always carry Mr Lunt and now Jesus and Mary in his hands so now, if he doesn't go in the bathroom, I take them away until he goes....   Boy that worked!   He zoom to the bathroom to get his little characters.   So funny!    With him, we have to do a game of everything almost because he is so stubborn about not doing something if it doesn't make sense.    I see some interesting teaching moments in the future.   He is bright though.   Sang the alphabet the other day without any errors.   A surprise for both hubby and I.  He was the child who took the longest to walk - 17 months for whatever reasons...

Jasmine is learning to walk these days.  She is cruising the walls now and taking her courage to go from one bucket of toy to the other without holding.   She is more girlie in her crawling, walking and even high five...   She rocks too but only in his seat during food time.   I think she might do it in the crib too but I am not sure about this.    She is a wiggly worm when it's time to change her.  Boy I never seen that.  Even my mother-in-law is amazed by it... she had babysat lots of kids and she never seen a kid moving so much.   So we shall see how she will be in the future.  I don't want to make any assumptions at this time.

Having said that, I think I will have fun next year when I will teach a 3rd grader, a SK and a pre-schooler as well as take care of a toddler...   Fun, fun, fun!

Posted by Canadianladybug at 12:39 AM No comments:

Email ThisBlogThis!Share to TwitterShare to FacebookShare to Pinterest
Labels: Homeschooling my kids

Is it the Blah of the season or something else?

It has been a while since I wrote a more personal blog....   Feels as though I have less time about doing this.   But I love doing the reviews and I think I will miss it when it is finished.   The TOS Crew has been a wonderful experience and I am already thinking of other possibilities...

In the meantime, even though I am taking my Vitamin D daily since the big news of it's potential benefits last year (reducing depression during winter time, possibility of reducing cancer if you have family who has it as well as better assimilation of the calcium...) it seems I have hit rock bottom.    I am tired easily and moody like I never been before.    I'm thinking pre-menopause but my doctor thinks it's too early...   Oh I did tell him that I had my first periods REALLY early in life but he wasn't convinced.   When I went to see him, it was mid January.    Haven't had a period since mid-november which was before my surgery...   Possible pregnancy?    I doubt it because hubby went to a vasectomy earlier that year but there is a 0.01% chances of reconnecting (1 every 2000).   We did home pregnance test and it was negative.  So when I went to the doctor, he said "Never know so let's do a blood pregnancy test... as well as check iron and other little things."   So I went for the blood test...  Negative and nothing else showed up.   The next day I had a bit of spotting for a couple of days.   Since then nothing.

I feel depressed, tired and moody.  My sleep is not so great either these days which doesn't help the tired part... Signs of pre-menopause from what I read.   So now I wait.   And try to find myself...

I'm turning 40 in March.   And somehow it seems to hit me.   Never really had a birthday party in my life.   Well 1 back in 5th or 6th grade.   Can't even remember much about it.   I have mixed feelings about a party so at first I told hubby to just forget about it.   So scrap the surprised...  he gave up.   Me?   Got more mixed up about it.   Just had a talk with him and he thinks that deep down I want one.   So we will do one but not a surprise...   I'll go with the flow.   I just wish I could celebrate with my friend Heidi who has the same birthday as me but is one year younger...  Love ya girl!  Honestly, I'm bless to share that special day with her even though she is in PA, USA and I am in ON, Canada.   What are the chances to have a friend who has the same birthday as you?

For now, I need to think about Dominic's 5th birthday later in February.   I want to make him a pirate ship cake...   Gotta find a model on the net somewhere...