My son has composed another song that he had not named yet.  He is asking anyone who is willing to comment on his YouTube Channel to comment the title they think should be given for this song.

So go listen to his new song and feel free to suggest a name for it.   And please do share with your friends, family and neighbors!


Ten years ago, when our children were smaller than they are today, we went on a trip to Niagara Falls.  Not too far from our campsite there was an attraction that caught our eye - a dinner show called Oh Canada Eh? After looking into it we decided that it would not be a good time to go with four small children in tow and we skipped the opportunity to have what looked like an out-of-the-ordinary evening.

Fast forward to 2019 where the Oh Canada Eh? is celebrating their 25th anniversary entertaining guests in the Niagara Falls area.   However, this year the show is making it's debut in the Nation's capital -  Ottawa .  The show has been brought in Ottawa by Totally Legit Productions and is performed at the Clark Hall in the RA Centre located at 2451 Riverside Drive in Ottawa.

I was approached with the opportunity to attend the VIP night which was held last week.   I was able to bring my whole family as well as the girlfriend of my oldest son.  We were looking forward to discover the Oh Canada Eh? Dinner Show pretty much for a whole week.

What is Oh Canada Eh?
For those of you who might not be familiar with Canada's longest running dinner musical, the Oh Canada Eh? is a two-hour musical comedy featuring over seventy Canadian songs. You will hear Canadian music from the post-World War II era to modern pop, from the maritime folk songs to modern classics which were sang by Canadian artists throughout history.   You will also meet famous Canadian characters like Anne of Green Gables, a hockey player, a Mountie and lumberjacks.  Audience interaction is also expected in this special dinner show.   You will discover Canadian culture and discover the unique sense of humour Canadians have.

What to expect
The performers will be entertaining you and serving you throughout the evening.  You will laugh at their jokes and sing along as you recognize the songs performed.   It is strongly suggested that you arrive at the RA Centre for 6:15pm for the Dinner & Show and expect to leave around 9pm (sometimes a bit later as we experienced it).

Note that is considered a family friendly performance.  The show does feature a live band and mild strobe lighting.

The menu
The food were not only a feast for our eyes but for our stomachs as well!   This five-course family-style meal is composed of products from all around the country.   When you arrive at your table, you will be greeted by a garden salad, fresh bread and French Canadian pea soup.   The soup was enjoyed by four individuals at our table and not so much by the other three.  But that's OK because French Canadian pea soup is the kind of soup that is not loved by everyone.  (Honestly, I was born and raised in Quebec... and I have never been able to enjoy pea soup to this day!  I tried it though.  It was very different compared to the one my mom used to make.  This one is more like a pottage than real traditional pea soup.)  Forty-five minutes into the show the rest of the meal is served at your table.  It consist of Manitoba roasted chicken, lightly battered and fried Atlantic haddock, Alberta Grade 'EH' roast beef (with a delicious mushroom sauce), vegetable medley and roasted PEI potatoes.     The meal is then completed with a maple chocolate swirl cake, hot tea and coffee.  Note that diabetic, vegetarian/vegan, gluten, lactose and allergen free meals are also available upon request.  And you can order a side of mac & cheese for the kids in your party as well. 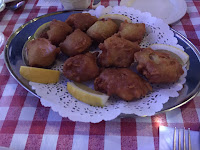 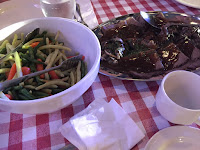 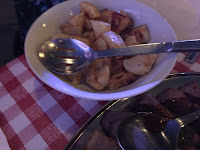 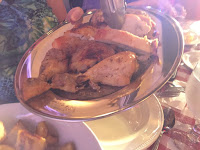 And for those of you who are wondering, yes there is a licensed bar that provides a fine selection of local wines, Canadian beers, mixed drinks and non-alcoholic beverages (additional charges apply for this!).

Our evening stated with a cocktail reception - where we were served Moose Juice as they call it.  Moose Juice is a non-alcoholic beverage by the way.  They were also serving alcoholic but we decided to stick with the non-alcoholic version.


Once we were seated - and to our surprise we were in the Gold Leaf section (more about this later) - we were able to eat a bit before the show started.  We met our server who will be performing as well during the evening and she was very nice.  After all the guests were seated, the show started and without waiting a minute, the casts entertained us with songs, historical information and...  some jokes.


We enjoyed the show and I loved to see my husband immediately singing along with most of the songs.   I personally was a bit disappointed not to hear more French Canadian song.  For example, when they interpreted some songs from Céline Dion it would have been nice to hear at least one French one since she started in that language.

The show itself was entertaining.   And the cast do interact with the people in the room for specific parts of the show.   Unfortunately for my husband, he was picked by our server while she performed as a saloon girl during the Klondike.  Now to make things clear, her costume was very appropriate and not at all like the dresses of saloon girls we see in movies.   She was just playing a role... going from man to man just like a butterfly goes from flower to flower.   My husband was the first one to be "picked" so to speak.   As she was "flirting" with him, my son says to her "He is married you know."  To which she answers "That's how I like them."  But then she goes on to the next guy at the next table and again to another...   It was historical in a way.  My kids knew a bit about saloon girls.   But I wish that this part would be changed a bit seeing that the show is considered a family friendly performance.  Be also aware that there were also a couple of other jokes that could be felt inappropriate from some people.

But as I think back of our evening I realize that pretty much all of us enjoyed it and thought that overall the show was well done, the food was incredible and we had a fabulous time together.   It was nice to be able to relax and be entertained at Oh Canada Eh?

As a homeschool family, we appreciated the fact that the items on the menu were coming from various parts of the country, the history we were exposed by learning more about singers and the songs that are considered Canadian, and the variety of the performance in so many ways.   I would recommend that families who are homeschooling would consider attending this dinner show with their older children.   Be aware of the little things that could raise an eyebrow in the show and approach the subject in advance with your kids.

At the end of the evening, as we were driving back home, we discussed about all the other potential singers/groups that could have been represented.   There were some disappointments in not hearing songs from Platinum Blonde for example.  I suppose it would have been too long of a show to include more songs from other bands that we know are Canadian....

Another thing that I think would make the menu more interesting would be to incorporate desserts from various parts of the country like Nanaimo bars for BC for example.   I would be a great way to discover the popular sweets from various part of the country in the meal.   Also, I would love to see some items from Yukon, North West Territories or Nunavut on the menu if possible.

Dates and Prices
The Ottawa edition of the Oh Canada Eh? Dinner Show has been going on since June 28th and will continue to be presented until September 14th.    The shows are usually schedule on the evening except for some Saturdays where a lunch show is offered (note - the roast beef is not served at the lunch show).  Free parking is available.

Prices varies depending of your seating preferences.   There are three offers - Golf Leaf ($82.95), Silver Leaf ($72.95) and Maple Leaf ($62.95).  You can visualize the seating chart on their website.  If you desire to attend the show only please note that only the Maple Leaf section is available for the price of $42.95 per person.

In Conclusion
Oh Canada Eh? Dinner Show is worth discovering with your family.  As mentioned above, be aware of a few things that could offend some people.   This is definitively a once-in-a-lifetime experience that you do not want to miss in Ottawa this year!
Posted by Canadianladybug at 3:49 PM No comments: Links to this post