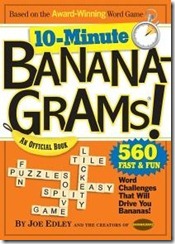 Everyone loves Bananagrams! And everybody loves instant gratification. Putting the two together, master puzzle maker Joe Edley offers 10-Minute Bananagrams!— over 500 all-new puzzles that are designed to be solved in ten minutes or less. This is lickety-split Bananagrams, perfect for the train, the bus, waiting rooms, bank lines, for carrying wherever and whenever a Bananagrammer has just a few minutes to indulge the obsession.

With two difficulty levels—the easier one-half banana and trickier one banana—these bite-size puzzles are quick to solve and highly addictive. Ten lively, mind-bending puzzle types are featured, including Banana Peels (add letters to words, then anagram); Banana Pudding (extend two-letter groups into six-letter words); Bunch of Bananas (anagram one word into two smaller words); plus the brand-new Banana Bites, in which the solver anagrams a group of letters to complete a word.

Supplementing the Bananagrams are fun banana facts, helpful word lists, and, of course, an answer key.

After having the opportunity of reviewing Bananagrams!, More Bananagrams!, and Bananagrams! for Kids now I will present you another book based on the award-winning word game 10-Minute Bananagrams!   This book contains over 560 fanst and fun words challenges that will drive you bananas for more.  Like the other books, this book is easy to carry around if you have an appointment or simply want to kill some time on the bus.  Did you know that in India, the banana was called “Fruit of the Wise Men” because men would meditate under the shady leaves of banana plants?   Fascinating fact isn’t it?

Anyhow, here’s the various word games that are included in this book.

My strong suggestion when using this book and the other ones as well, would be to make certain that your have a pencil to solve the problems.  I find it easier if you have an eraser handy in case you make some errors!

Mind you this book is not just handy for appointments or for the bus.   It could be the perfect book to pack while going on vacation whether you are driving (well for the passenger anyway!) or flying.  It is also a great item for older kids who are going to camp or if they want to challenge themselves during lunch time at school.

Here’s another thing I learned about banana leaves.   Apparently they are edible – however you need to cook them before they became tasty.    Also they are quite versatile – they can do anything from polishing leather shoes to killing warts.

So if you are the kind of person who enjoys word games, you will definitively like this jewel of a book.    You will be challenge and you will also develop your vocabulary.  This book is perfect for young adults and adults.

10-minute Bananagrams! is available at your favourite bookstore, even amazon.ca

Posted by Canadianladybug at 8:00 AM