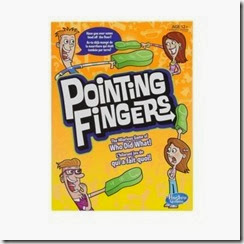 Who's done what? You'll find out in the hilarious game of Pointing Fingers! You'll also find out how well you know your family and friends in this fast-paced question-and-answer game. Each person reads a question from one of the cards, then everyone else writes down how often they've done it on their Truth Meters. Then you point out who you think has done it the most with your funny Foam Finger! If you're right, you score. Don't miss out on the big laughs and hilarious discoveries of the Pointing Fingers game!
Pointing Fingers and all related characters are trademarks of Hasbro.

I didn’t know what to expect about this game…. The title itself kind of throw me off as we usually have the wrong impression when you point at someone right?   Well this game use  and extra wide finger in order to point at another player but it’s only to identify the one who does something the most.

Let me explain to you how the game works.  First you select a card and one person read a question out loud.   There are three different questions on the card so you need to pick one and that’s the one that people will answer.   For example, one card will say 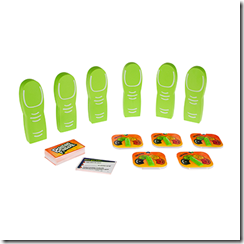 --> Talked your way out of trouble?

Whichever question you have selected, the players will select their truth meter and picks how often they’ve done it.

Then, everyone put their green finger and have to point to who does it the most.   You score points if you are right.

As you can see it’s a simple game that could easily be used at a party, as a ice breaker or during a youth event.    And sometimes you can have surprises in the way your friends and/or family might answer some of these questions.   Hilarious moments are expected and be aware that the truth will come out whether you like it or not.

This kind of game would be definitively more fun with a bunch of people.  I would say that six people would make the game more interesting.   I would also recommend this game for get-together with family on special holidays like Thanksgiving, Christmas or New Year.

Pointing Fingers is available at your favourite game store, even amazon.ca and amazon.com.

Disclaimer: Thanks to Hasbro Canada for sending me the above mentioned product for review purposes . I was not monetarily compensated for this review. Please note that the review was not influenced by the Sponsor in any way. All opinions expressed here are only my own.

Posted by Canadianladybug at 4:15 PM