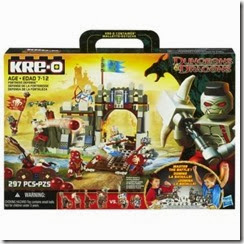 Collect the world and Master the Battle with the KRE-O Dungeons & Dragons sets! You can use the 297 pieces in this Fortress Defense set to build a castle in 3 ways and defend it from the hordes of the Orcs. Set your knight Kreon figures on the wall, armed with their bows and spears. Will the castle stand against the powerful assaults of the catapult you'll build? If not, send your knight Pikesman and Archer Kreon figures crashing into battle against your Orc Kreon figures as they storm over the drawbridge! You'll build one magical adventure after another with the Fortress Defense set!

March Break is here and we are already at day two of the week off school.    As homeschoolers we have slowed down a bit during February and again this week but even though there are some school done in the morning we don’t miss an opportunity to have fun either.    But I know that some parents might be wondering how they could entertain their kids this week so Hasbro has sent me the new Dungeons and Dragons KRE-O set in order to blog about it.

Dungeons & Dragons has been existing for as long as I can remember.   I recall seeing people playing this when I was going in high school and throughout cegep and university.   Even today, I know people are still playing the famous game.   So it wasn’t a huge surprised when I realized that Hasbro has tapped into the possibilities of Dungeons & Dragons and decided to create a KRE-O series based on it.   To be honest what surprises me is that no other company has thought about it until now…. 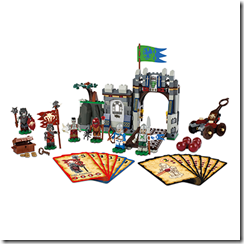 This set is very functional and will allow diversity in the building of the fortress as you can create at least three variations of the fortress.   The catapult will thrown boulders in order to destroy the fortress and the two soldiers will try very hard to stop the attack of their four enemies (personally I think I would have put a bit more soldiers in the set in order to make it more fair…)  A treasure chest containing gold is also included in the set as well as a spider.  I find this set very detailed with great colors for the banners, flags for both parties, jewel on top of a spear, and so much more.  This set will bring some fun time for the kids who play with it.

The Kre-O Dungeons & Dragons Fortress Defense is available at your favourite toystore.

Posted by Canadianladybug at 3:21 PM