The Butterfly and the Violin 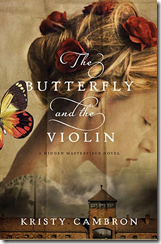 Today. Sera James spends most of her time arranging auctions for the art world’s elite clientele. When her search to uncover an original portrait of an unknown Holocaust victim leads her to William Hanover III, they learn that this painting is much more than it seems.

Vienna, 1942. Adele Von Bron has always known what was expected of her. As a prodigy of Vienna’s vast musical heritage, this concert violinist intends to carry on her family's tradition and play with the Vienna Philharmonic. But when the Nazis learn that she helped smuggle Jews out of the city, Adele is taken from her promising future and thrust into the horrifying world of Auschwitz.

The veil of innocence is lifted to expose a shuddering presence of evil, and Adele realizes that her God-given gift is her only advantage; she must play. Becoming a member of the Women’s Orchestra of Auschwitz, she fights for survival. Adele’s barbed-wire walls begin to kill her hope as the months drag into nearly two years in the camp. With surprising courage against the backdrop of murder and despair, Adele finally confronts a question that has been tugging at her heart: Even in the midst of evil, can she find hope in worshipping God with her gift?

As Sera and William learn more about the subject of the mysterious portrait—Adele—they are reminded that whatever horrors one might face, God’s faithfulness never falters.

As I read this historical novel I was immediately sucked in the story.  Part happening in the past and part happening in the present time, the novel is based on a mystery that two people are trying to resolve but for different reasons.    The main characters in the present day  will go through the emotions of their discoveries in order to mend their own heart and to discern God’s guidance in their lives.   However, as the two main characters of the present time try to resolve the mystery of the missing original painting, the reader is propelled into the 1940s during the 2nd World War and learn how Adele Von Bron, Vienna’s prodigy, ends up in Auschwitz and how she will learn to live in the conditions she finds herself in.  Did this talented young woman survived her time in a concentration camp?   To discover the answer you will have to read the book.

I really enjoyed the book.   I discovered in the past year that I really like historical fictions.    They have a way to touch your soul in the deepest ends.  This time, as I read the book I reflected on the fact that many have died in the concentration camps during the 2nd World War.  One morning as I was breading the hair of my 6th years old daughter, I was almost in tears thinking of the fact that kids went there and died during their imprisonment.   This book has encouraged me to read a bit more about the 2nd World Ward and learn about this part of history.   I already have selected some other titles during this period of time – some novels and others being autobiographies.

If you have an interest of reading historical fiction and enjoy learning more about life in the concentration camps, I suggest that you pick up The Butterfly and the Violin.  It is a great book that is perfect for anyone.   It could also be used as a fiction to read while studying the 2nd World War.

The Butterfly and the Violin is available for purchase at your favourite bookstore, even on amazon.ca and amazon.com.

The book is also available for the Kindle.

Disclaimer: Thanks to Thomas Nelson for sending me the above mentioned product for review purposes . I was not monetarily compensated for this review. Please note that the review was not influenced by the Sponsor in any way. All opinions expressed here are only my own.

Posted by Canadianladybug at 7:50 PM