Ever since the Transformers have appeared on the big screen in theaters, you can sense the popularity of the characters going on a rise with a new generation of children everywhere.   This Christmas season you will see more toys based on Transformers. 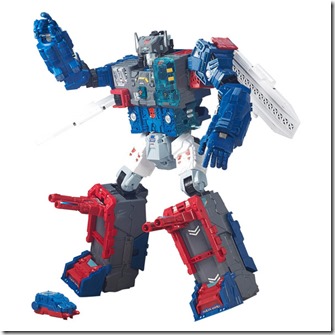 This time around, I think Hasbro has come up with the biggest Transformers toy ever!  With a height of almost 2 feet tall, the Fortress Maximus figure is definitely the biggest one on the market.  This particular toy is part of the Titans Return line.  This particular line of toys highlight the battle that exist between the Titans – an ancient race of giant, city-sized warriors – and the Autobots and Decepticons who have to team up with Titan Masters who are smaller bots that give our familiar bots increased abilities.

The Fortress Maximus is a city in itself offering a base of operation to the Autobots.   This huge figure comes with a Titan Master Emissary figure and a Cerebrox figure.

What is impressive is the size of the toy – it is big.   Proportion wise it goes about half way to my thigh (above the knee).   It is also very versatile as it can transform into three mode – robot, battle station and Autobot city. 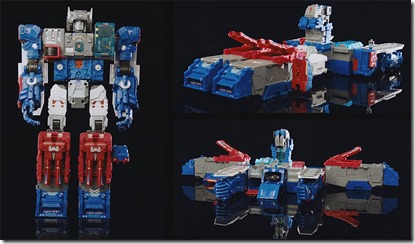 This figure also connect with the Titans Return Leader Class Figures (which are not included in the package by the way) in order to form Cybertron City.

When looking at the figure itself when it is in a robot mode, you can’t help but to be amaze at the detail involved in making it.  It’s hands and fingers are moving with ease to the point it could do a fist.   All moveable parts are easy to manipulate in order to create the battle station of the city.

I could see a child playing with this huge figure as well as other Transformers figures/vehicles or even mini figures in a more of city.  Hours of fun time can be spent playing with this gigantic figure.   I could also see a huge fan of Transformers spending a bit of money in order to get this Maximus figure in their hands for decoration.

Note that this specific figure requires 2 1.5 V AAA batteries which are not included in the package either.

My only disappointment would be the price tag on this figure.  But I guess that having something bigger than usual also means to spend a bit more of money on it.  Personally I cannot justify spending so much on a Christmas gift.  But I also know that there are fans out there who would be very interested in having this amazing figure in their collection.

The Transformers Generations Fortress Maximus Figure is available for purchase at your favorite toy store, even on amazon.ca and amazon.com.

Disclaimer: This product has been provided courtesy of Amazon.ca Vine Voices for review purpose. I was not monetarily compensated for this review. Please note that the review was not influenced by Amazon.ca or the Sponsor in any way. All opinions expressed here are only my own.

Posted by Canadianladybug at 1:40 PM