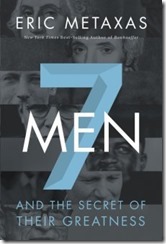 In Seven Men, New York Times best-selling author Eric Metaxas presents seven exquisitely crafted short portraits of widely known—but not well understood—Christian men, each of whom uniquely showcases a commitment to live by certain virtues in the truth of the gospel.

Written in a beautiful and engaging style, Seven Men addresses what it means (or should mean) to be a man today, at a time when media and popular culture present images of masculinity that are not the picture presented in Scripture and historic civil life. What does it take to be a true exemplar as a father, brother, husband, leader, coach, counselor, change agent, and wise man? What does it mean to stand for honesty, courage, and charity, especially at times when the culture and the world run counter to those values?

Each of the seven biographies represents the life of a man who experienced the struggles and challenges to be strong in the face of forces and circumstances that would have destroyed the resolve of lesser men. Each of the seven men profiled—George Washington, William Wilberforce, Eric Liddell, Dietrich Bonhoeffer, Jackie Robinson, John Paul II, and Charles Colson—call the reader to a more elevated walk and lifestyle, one that embodies the gospel in the world around us.

This book contains a mini biography for the seven men highlighted.   Each of them is regarded as strong example for many people.    The seven men presented in this book are George Washington, William Wilberforce, Eric Liddell, Dietrich Bonhoeffer, Jackie Robinson, Pope John Paul II, and Charles W. Colson.

I will admit that I was familiar with the story of four of these men.  I knew about the Pope because I was raised catholic and he was Pope during my growing up years.   Back in the 1980s when he visited Canada, I was part of the dance group who did a presentation at the Montreal stadium.    William Wilberforce, Eric Liddell, and Dietrich Bonhoeffer were the three other men whom I have discovered their story and impact in more recent years.

Nevertheless, this book is an inspiration for the reader who takes the time to read it.   I had more trouble with the section on George Washington because I find it doesn’t really impact a Canadian.  However I have learned a great deal about his courage and dedication during the war years.    As I read about these seven men, I almost wished that there were comprehension  questions as well as challenges for the reader.   Why?   Well I can see me asking my teenage son to read about a specific man and answer the questions as part of his literature studies.   Besides reading about strong men of faith is always useful for a teenager – whether boy or girl.

Seven Men is available for purchase at your favorite bookstore, even amazon.ca and amazon.com

The book is also available on Kindle.

Disclaimer: Thanks to Thomas Nelson for sending me the above mentioned product for review purposes . I was not monetarily compensated for this review. Please note that the review was not influenced by the Sponsor in any way. All opinions expressed here are only my own.

Posted by Canadianladybug at 11:39 AM