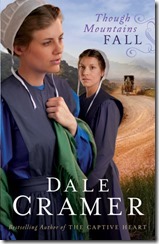 “I want you to promise you will always be my sister.”

There were tears in Miriam’s eyes as their foreheads touched and Rachel whispered, “No matter what. Always.”

Now in its fourth year, the Amish settlement in Mexico is thriving.  But as new settlers arrive, sons and daughter marry, babies are born, and crops grow thick, a storm looms on the horizon.  And Caleb Bender knows – perhaps better than anyone – that the worst of storms don’t come from the western skies.

They come on horseback.

When their very existence is threatened, the Amish turn to the Mexican government for help, only to discover that the rulers of men are fickle and security is an illusion.  Tried by fire and riven by war, Caleb and Domingo come to understand that the kingdom of God is not to be found in land or buildings or gold or armies, but in the hearts of peaceful men trying to feed their families.

Watching helplessly as daughter Rachel, Miriam, and Emma are drawn inexorably toward their separate destinies, Caleb is forced to confront the most important decision of his life.

Who is Dale Cramer?

Dale Cramer is the author of the bestselling and critically acclaimed novel Levi's Will, based on the story of Dale's father, a runaway Amishman. Dale's latest series, THE DAUGHTERS OF CALEB BENDER, is based on an Amish colony in the mountains of Mexico where three generations of his family lived in the 1920s. He currently lives in Georgia with his wife of 36 years, two sons and a Bernese Mountain Dog named Rupert. Visit him on his Web site at www.dalecramer.com

I had the privilege to discover Dale Cramer books a couple of years ago and I go hooked on his style.   I have read and reviewed the previous two titles of the Daughters of Caleb Bender series – Paradise Valley and The Captive Heart – and didn’t hesitate when I was offered to review the conclusion.

It was good to reconnect with characters that I have learned to love and enjoy.   Knowing that this novel is based on actual events that happened makes it even more special I find.   Life is full of unexpected things happening and it’s important to trust God in all of it.   But when events brings fear in the life of the Amish, they have no choice but to move on.   Before these drastic events arrive, happier events will come to the community though one of them will bring distance between some members.   Through the pages of this book, you will discover the power of forgiveness and wisdom.   You will also discover how a dramatic event will turn one of the character to become what I would say legalistic and making a vow that deep down you know it isn’t realistic.

While in Mexico, a particular event happens to one of the grand-kids of Caleb Bender and someone tells the mother that her son will become a peacemaker.   The way the book finishes, I am left wondering if there will be another series about the grown-up grand-kids of Caleb Bender and how this little Moses will bring peace in his family.    I can see that the author has laid down the foundation of a future story if he chooses to and I sure hope that he will do because I really like the fact that it is based on actual events.

This book is the conclusion of the series of three books.  I don’t find that it can be read independently as it will refer to previous events that happened in the two first books.   Consequently, I strongly suggest that the reader would read Paradise Valley and The Captive Heart before jumping in Though Moutains Fall.  The Daughters of Caleb Bender is a great Amish historical fiction.

Though Mountains Fall is available at your favourite bookseller from Bethany House, a division of Baker Publishing Group, even on amazon.ca and amazon.com.

The book is also available on Kindle.

Disclaimer:   Book has been provided courtesy of Baker Publishing Group and Graf-Martin Communications, Inc.  I was not monetarily compensated for this review. Please note that the review was not influenced by the Sponsor in any way.  All opinions expressed here are only my own.

Posted by Canadianladybug at 6:28 AM