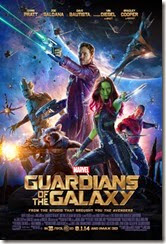 The month of August is just around the corner and with it comes a much anticipated comic book related movie – The Guardians of the Galaxy which is coming out in theaters on August 1st.  Needless to say that my husband and I are planning to go see this movie as soon as possible.    One of the popular characters of Guardians of the Galaxy is Rocket Raccoon.    Since the movie was announced a few years ago, the comic book fans have been trying to snatch the first appearance of the main characters in the movie.

My oldest son, Alexandre, was quick to check out which comic book had the first appearance of Rocket Raccoon.  Turns out that it is Incredible Hulk #271 and the value of this comic has been increasing in the past year or so simply because of the upcoming movie. 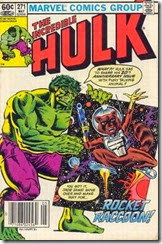 To celebrate the upcoming movie of the Guardians of the Galaxy, Hasbro has a line of toys that would please small and big kids.   From action figure to space ship as well as masks, you will find something that will bring joy in a boy or girl in your life.    I received three items from Hasbro Canada to review and interestingly enough all three items are based on the smallest character of the group – Rocket Raccoon! 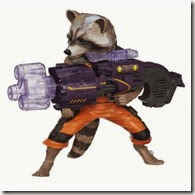 The Guardians of the Galaxy need all the help they can get to save the cosmos from destruction, and this is just the raccoon for the job! This incredible electronic Rocket Raccoon figure has a spinning blaster that lights up in the heat of battle. When you press the button on his leg, the blaster fires, and you can choose the battle sounds you want to hear! The intergalactic action will be epic with your Big Blastin’ Rocket Raccoon figure!
Figure comes with blaster.  Requires 3 "AA" batteries (demo batteries included).  Adult assembly required. No tools needed.

This toy is not a small one.   On the contrary, if I put my hands next to it with my middle finger touching the table, the head of Rocket Raccoon is going above my wrist.    This toy will bring numerous noise in your household too as Rocket Raccoon will blast through anything your child will want to knock off.   Mind you it’s only the sound you will hear nothing will be destroyed.   But the blaster is almost as big as the raccoon itself.    But Rocket Raccoon would be himself without his blaster.    When you press the button on the top of the blaster or on his leg, Rocket Raccoon will start shooting or charging his gun.   Sometimes, you might hear him growling or yell and start shooting immediately.   Every time the blaster is shooting, the pressure of the gun with make the raccoon tremble.  In a way the blaster works a bit like a machine gun seen in the gangster movies.   The mouth, head and ears of Rocket Raccoon will move a bit as he blast his way.

Though I personally like this toy for collectors, I am uncertain on how it will be received in household.   I mentioned to my husband that I was thinking he should put it in his office for decorations. 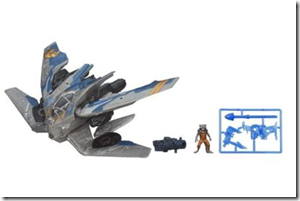 I wasn’t expecting this particular vehicle from the Guardians of the Galaxy but I was very surprised and delighted to realized that I received the Rocket Raccoon Warbird instead of the one I was suppose to receive.    This space vehicle is small to be held in your hand.   It comes with everything you need to explore the galaxy – even a small version of Rocket Raccoon!

You can upgrade the space ship with the battle gear that is included in the box.   Also the wings moves up and down and as you may expect it there are cannons on this warbird.  And like Rocket Raccoon will say himself “When you’re facing down whatever nastiness space throws your way, there’s only one thing better than a really big cannon: two really big cannons.”

The Rocket Raccoon Warbird is the perfect item for your child if he/she wants to fight the aliens throughout space. 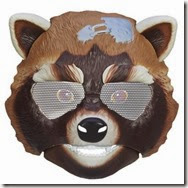 I think this one is my favourite item of the lot.   I just love the look of this mask and the details included in it.     When you wear the mask you can move your jaw to activate the mask.   What?  Yes, when you move your own jaw, the mouth will open, the eyebrows will raise and the ears will move.   Essentially, whoever wears the mask control the action on it.   A blaster is sold separately if you choose to dress yourself as Rocket Raccoon at Halloween.

All these toys and more other ones are available at your favourite toy store, even on amazon.ca and amazon.com.

Disclaimer: Thanks to Hasbro Canada for sending me the above mentioned product for review purposes . I was not monetarily compensated for this review. Please note that the review was not influenced by the Sponsor in any way. All opinions expressed here are only my own.

Posted by Canadianladybug at 9:59 AM