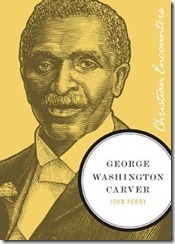 A generation of 20th-century Americans knew him as a gentle, stoop-shouldered old black man who loved plants and discovered more than a hundred uses for the humble peanut. George Washington Carver goes beyond the public image to chronicle the adventures of one of history's most inspiring and remarkable men.

George Washington Carver was born a slave. After his mother was kidnapped during the Civil War, his former owners raised him as their own child. He was the first black graduate of Iowa State, and turned down a salary from Thomas Edison higher than the U.S. President to stay at the struggling Tuskegee Institute, where he taught and encouraged poor black students for nearly half a century.

Carver was an award-winning painter and acclaimed botanist who saw God the Creator in all of nature. The more he learned about the world, the more convinced he was that everything in it was a gift from the Almighty, that all people were equal in His sight, and that the way to gain respect from his fellow man was not to demand it, but to earn it.

I was intrigued and very interested in learning more about George Washington Carver after I read and reviewed The Boy Who Changed the World and Butterfly Effect.    I came across the name a few time in the homeschool communities also.   So my curiosity was picked… to the point that I jumped on the e-pub version of the book when it was available through the blogger’s program at Thomas Nelson.

I love biographies and I am definitively not disappointed with this one.   Through adversity and though times, the one known as George Washington Carver stepped in faith and became a painter and botanist.   He was a devoted believer in God and saw Him all around creation.  I find it interesting that even though he was offered a better salary to dedicate himself in teaching and encouraging black students.    He knew the importance of an education and didn’t think twice about what his calling was.

George Washington Carver is also the one behind all the different  uses for the peanut and learning more about his life gave me another perspective on how former slaves were hardworking and dedicate in what they did.    Reading about this humble man is a delight for my eyes!   I strongly recommend this book to anybody who like biographies.

George Washington Carver is available at your favorite bookstore, even amazon.ca.

Disclaimer: Thanks to Thomas Nelson for sending me the above mentioned product in the e-pub edition for review purposes . I was not monetarily compensated for this review. Please note that the review was not influenced by the Sponsor in any way. All opinions expressed here are only my own.

Posted by Canadianladybug at 2:15 PM