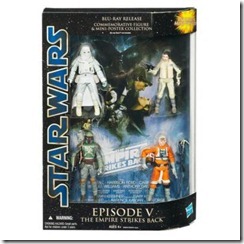 Imperial forces attack the Alliance base on Hoth, forcing the Rebels to flee the planet. As Luke Skywalker continues his Jedi training on Dagobah, Darth Vader enlists the help of bounty hunters to track down the new Jedi. When Vader and Luke finally meet, the Sith Lord reveals a startling secret that changes everything for young Skywalker.

Make watching Star Wars: The Empire Strikes Back on Blu-Ray (sold separately) all the more amazing with this cool Commemorative Figure and Mini-Poster Collection! You’ll get detailed LUKE SKYWALKER, BOBA FETT, PRINCESS LEIA and SNOWTROOPER figures with corresponding costumes and accessories from the movie. The collection also includes a mini-poster for the movie. Don’t miss out on the only collection to go with the Blu-Ray release of Star Wars: The Empire Strikes Back!

When I received this particular item from Hasbro Canada, I was pleased to see that there would be one figurine for each of my kids – and lucky me there is a girl in our package. 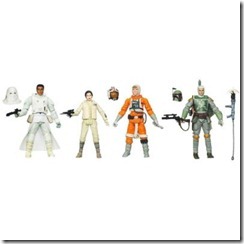 We received the package that goes with Episode V The Empire Strikes Back where you get Luke Skywalker, Boba Fett, Princess Leia and a Snowtrooper.    Three male characters and one female for my three boys and one girl.  Couldn’t be more perfect than that!

All  my kids are totally enthusiastic about the Star Wars movies and anything they could put their hands on that is Star Wars they are jumping on it.    Having these characters will mean a lot of pretend play with the four kids when they spend time together.

The characters are very flexible and the detail on them is simply amazing.    The legs and arms move easily compare to the figures back in the 70s.   These ones remind me of other popular figures from the 80s from another popular show on television.    You could easily put them as though they run and more.

Also included in the package is a mini-poster of the movie.   There are 6 different packages to choose from or if you are a Star Wars collector to grab before they are all gone.   All these special boxes for each individual movies are available at your favourite toy store. So whether it is for your child, for a loved one who just love anything and everything that is from Star Wars or for yourself, these packages of Star Wars figures would be a great Christmas gift this year.

Disclaimer: I received the product for review purposes. I was not monetarily compensated for this review. Please note that the review was not influenced by the Sponsor in any way. All opinions expressed here are only my own.

Posted by Canadianladybug at 4:19 PM