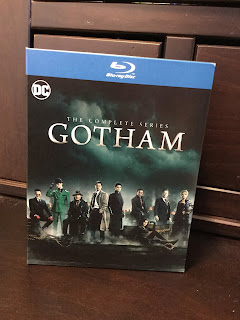 Today I am presenting you a new Blu-Ray set that could find numerous fans of Batman drooling this Christmas season.   Presenting Gotham the Complete Series which is now available everywhere.

What is Gotham? Well Gotham is a crime drama television series based on characters from DC Comics and appearing in the Batman franchise.  Essentially, you will follow Bruce Wayne when he was a teenager and how he slowly became the cape crusader that we all know.   Also in this series, you will see James Gordon and numerous villains like Penguin, Riddler, Carwoman, Poison Ivy, Scarecrow, Mr. Freeze, Hugo Strange, Solomon Grundy, Ra's al Ghul, Nyssa al Ghul, Bane and The Joker.

Keep in mind that this television series is more viewed like a prequel series based on Batman. What I mean by this is that you will visualize the process on how Bruce Wayne became the Batman, how James Gordon becomes an ally to Batman as well as how the villains became who they are in the comics. 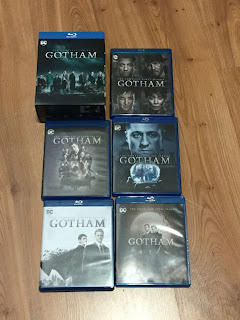 
Personally, I always found this television series to be darker than what I am used to.   Mind you the Batman movies/comics are always a bit more darker than other DC superheroes movies/comics so I suppose it makes sense to have a darker mood for the television series as well.   However, my husband who has been a big fan of Batman for years now has enjoyed the series while it was available online.  Unfortunately, he was not able to watch the fifth season as of yet because he could not access the series anymore.  So he was quite pleased when I received this blu-ray set because now he will be able to watch the final season of one of his favorite shows.

Gotham: The Complete Series is now available in Blu-Ray or DVD formats at your favorite store, even on amazon (Canada and US). It would make a perfect gift to any fan of Batman in your life.


Disclaimer: I have received this Gotham The Complete Series in Blu-Ray format from Warner Bros, Home Entertainment and Falkowitz PR.  I was not monetarily compensated for this review.  Please note that the review was not influenced by the Sponsor in any way. All opinions expressed here are only my own.
Posted by Canadianladybug at 8:36 AM