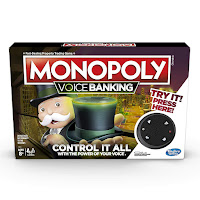 Move over old Monopoly games, here comes a new version this Christmas season - Monopoly Voice Banking -  which allow you to control the game with the power of your voice.
In this electronic version of the game, Mr. Monopoly is the Banker and manages player's money via his top hat. The Monopoly Voice Banking game features lights and sounds, and comes with an interactive Mr. Monopoly banking unit in the form of a top hat.

This iconic Monopoly top hat is voice activated and the personality of Mr. Monopoly shines as he handles the transactions.  He keeps tabs on player's money and properties so there's no cash or cards to think about. (I suspect that many will like the fact that a banker is not necessary for this particular version of a classic game!)  You simply have to talk to Mr. Monopoly (aka the top hat) and he will respond to you.

For example, press the token's button and say, "Buy St. James Place."   Mr. Monopoly will track the transaction and keeping the game moving.  With the Monopoly Voice game, players will travel more rapidly around the board aiming to be the person ending with the most money and the highest property value in order to win. 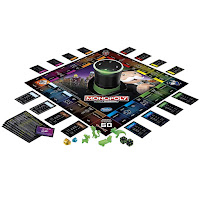 The game also got a revamped gameboard with darker colors than the original Monopoly.   I tend to like the darker background as well as the brighter colors on it as it give a more electronic feeling to the game.

Apparently this version of Monopoly will allow to play the game faster as you simply have to speak your decision to Mr. Monopoly and he will manage everything.  This allows you build your properties sets and get the houses and hotels up faster.

The game was designed for ages 8 and up and will allow 2 to 4 players.  Note that demo batteries are included in the game but you will need to replace them with 3 AA batteries.

The Monopoly Voice Banking game is available at your favorite store, even on amazon (Canada and US).


Disclaimer: Thanks to Hasbro Canada for sending me the above mentioned product for review purposes . I was not monetarily compensated for this review. Please note that the review was not influenced by the Sponsor in any way. All opinions expressed here are only my own.

Posted by Canadianladybug at 8:09 AM