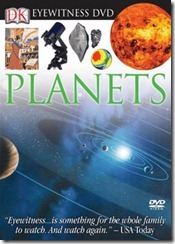 Which planet would float in your bathtub if you had one big enough? What is the fire and brimstone world of Venus really like? The Eyewitness Planets DVD takes you through space and time, witnessing the sun and traveling to the outer limits of our solar system.

Eyewitness DVDs are an award-winning series that are visual companions to DK’s Eyewitness series. Each DVD is approximately 60 minutes long and feature narration by Martin Sheen. A great addition to any household library or audio-visual collection.

I think it is the first time I have mixed feelings about an Eyewitness DVD.  Not that it isn’t well done but it’s just that I am debating if it was wise to show this to the younger children.

I guess I was expecting to learn more about the planets – which we did – without having mentions on astrology and such.   But it isn’t the case and like it or not one day our kids will be expose to it.   So I definitively prefer that they are expose to it while I am with them so I can stop the movie and talk about what was said right away.   That’s what I did.    A couple of times, I stopped the movie and explained the difference between Creation belief versus Evolution belief.    My kids know that there is two sides on the coin and that when they go to higher education one day they will encounter issues concerning the two debates on how the world was created.      I strongly believe in exposing my kids to these two set of beliefs.   Why?  Because I want them to be able to defend their faith and able to discuss it with others.

Now the DK Eyewitness DVD on planets is fabulous for explaining the differences in the planets, how some of them were discovered, and even contain some historical information on Copernicus and Galileo.    The kids particularly enjoyed following the spaceship in the Solar System to explore the different planets.    We also learned that one of our planets could float in a bathtub if we had one big enough to contain it.    I won’t tell you which planet it is…. you will have to discover it youroniself!

Even though this DVD is not based on teaching supporting the creation beliefs, I think it is a good resource to have in your DVD library.    I strongly support teaching the kids both sides of the coin when it comes to Creation vs Evolution.    I know that not all families would agree with me and that’s okay.    That’s why homeschooling is so flexible.

The Eyewitness DVD Planets is available for purchase at your favorite bookstore, even amazon.ca.

Disclaimer: Thanks to DK Canada for sending me the above mentioned product for review purposes. I was not monetarily compensated for this review. Please note that the review was not influenced by the Sponsor in any way. All opinions expressed here are only my own.

Posted by Canadianladybug at 7:36 AM