Lego Book – and a contest for young Lego fans 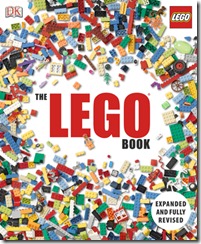 Discover all there is to know about one of the world's most beloved toy companies.

Beautiful pages reveal, explore, and celebrate the fascinating story of LEGO® bricks and the history behind them in this newly updated edition of The LEGO® Book. Along with 56 new pages, a timeline highlights key moments in LEGO history, and special features spotlight numerous groundbreaking and momentous achievements. Includes new and updated information about LEGO Star Wars, LEGO Ninjago, LEGO Friends, and much more.

Explore all the main LEGO toy systems, the LEGOLAND® theme parks with their amazing animated models, and the LEGO Group's spectacular diversification into films, video games, and the visual arts. Incorporating clear instruction panels on how to create great models from just a few simple bricks, The LEGO® Book is truly a treasure perfect for any LEGO fan!

What made you want to become an author?

I've always been an avid reader. As a kid, I read whenever and wherever I could, especially adventure, sci-fi and fantasy stories. Sometimes I would devour six or seven books a week! Although I originally planned to work in the sciences, reading and writing were always big passions of mine, and when the opportunity arose, I jumped at the chance to start writing stories for (and about) LEGO characters and sets.

When did your fascination with LEGO® first start?

I've been a fan of toys that you can interact with and change around all my life, too. I got my first LEGO sets when I was four or five (I think they were #709 Police Boat and #897 Mobile Rocket Launcher) and would spend hours taking them apart and building new things out of the pieces. I must not have been very good at sharing, though, because my dad and I had to have our own separate collections of LEGO bricks.

How did you get your start writing comic and animation scripts for LEGO® bricks and minifigures?

When I first joined the LEGO Group in 2001, I started out testing and proofreading the website at LEGO.com, but what I really wanted to do was create stories. I was eventually able to start writing some episodes and character bios for the BIONICLE theme, and that led to story work on Knights' Kingdom and EXO-FORCE. Pretty soon, people at the company were asking me to write books, comics, TV spots and short animations, which was incredibly cool for me!

What has been your favorite storyline that you've developed for LEGO?

I liked working on EXO-FORCE and Knights' Kingdom (though I didn't develop the original story for either theme), and I've got a soft spot for Pharaoh's Quest. And of course I've gotten to write for some of my favorite licensed themes, like Star Wars, Pirates of the Caribbean, and The Lord of the Rings – the big "Search for R2-D2" storyline that ran in LEGO Club Magazine comics and online animations throughout 2009 is definitely one of my favorites. But the very top was the story that I wrote for the Adventure Designer level of LEGO Master Builder Academy. It was created to inspire members to make up their own stories and build them out of their LEGO bricks, and I really enjoyed putting it all together.

What was your favorite part of the The LEGO® Book to work on?

Although it was also the toughest part to write, what I really liked the most was researching and writing about the history of the company and its earliest toys. I learned a lot of new things!

Do you have a favorite LEGO® character?

I think the character that I'm fondest of is Ryo, the eccentric inventor and pilot from EXO-FORCE. His habit of treating his battle machines like they're real people was a lot of fun to write. Second to him would be the minifigure battle droids from LEGO Star Wars – those poor little guys are hilarious!

The LEGO® Book has a fascinating timeline of LEGO® history running throughout it. What do you think is the most groundbreaking achievement in LEGO® history?

I can't think of anything more important than the development of the original plastic "Automatic Binding Bricks" in 1949, and the patenting of the stud-and-tube connection system in 1958. Everything that the company is about today comes directly from there!

What is the most remarkable LEGO® Super Model you've seen in person?

One of the LEGO Master Builders here at the office built an enormous Republic Attack Cruiser from the Star Wars prequels some years ago. It was an incredible model, full of secret details like an upside-down lightsaber battle and a movie theater hidden inside. I swore I'd find a way to bring it home someday...but I never managed it. I don't think it would have fit in my car, anyway.

After all this time why do you think LEGO® is still such a popular, sought-after toy?

Because no matter how many special pieces and themes we may create, at the end of the day a LEGO set is a toy that you can take apart and turn into anything else that you can possibly imagine. What could be more perfect and enduring than that? 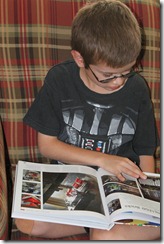 As soon as I took out this book, one of my kids jumped on it.    All of them loves Lego and can build for hours when motivated especially when there is a contest (see below for more details!).    When I got this book, I seriously thought that it would contain step-by-step ideas for the kids to explore and develop their Lego skills.   Ah!  I was so wrong.  This book is not an idea book but more like a book that unfolds the story of Lego as a company and the brick itself!

Literally  it is a  trip down memory lane…   As soon as I skipped through the pages, I could identify some of the Lego package I have received when I was younger in the 70s (and I still have the blocks and instructions believe it or not!) Now my own kids plays with them!  *grin*  Here’s two of the boxes I had received.   The box on the left with the characters on it, I received when I was in France while my dad was training in Lyon.    I was five years old then. 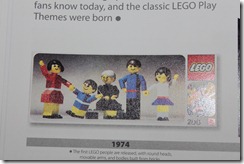 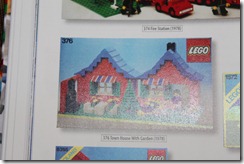 The book starts with how it is a family business and how Lego became a trademark toy over the years.   Back in 1974, I believe that it wasn’t easy to find Lego toys in Canada but in the years that followed the famous boxes found their way on the Canadian market.   You will also get a timeline to discover what major products were developed in what year.     You will also have the opportunity to read more about the patent and the brick itself, learn when the first of some of the elements came out on the market and discover how the Lego bricks are made. 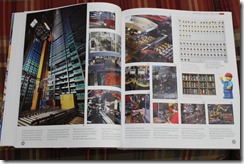 Once you have gone through history and discover how they are made, you will explore the pages where the various play themes are presented.  Then you will discover the amazing creativity of the people who helped to put Legoland together.   These pages have brought major reactions from my kids.   Now my dream is to bring my kids to LegoLand in Florida and even to the one in Denmark where everything started.

In the book, you will also get to learn about the Lego Master Builders which has definitively picked the interest of Dominic.

Lego fans will love to learn more about the history of the famous brick as well as discover the play sets that were created through the years.    I am pleased to have this book in the house because it motivates my child to read more.

A CONTEST FOR LEGO FANS! 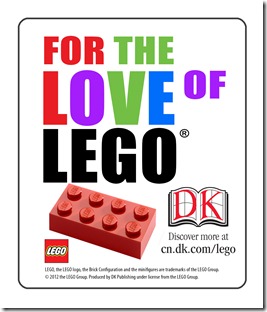 DK Celebrates LEGO and the love of creativity!

As the world's bestselling publisher of LEGO books we want to celebrate our joy of the brick with a month-long photo contest – with a fabulous prize of an amazing collection of DK’s LEGO books worth over $200!

We want to see what creative kids ages 14 and under can make with their LEGO.   Simple send us a photo and at the end of the month our Canadian LEGO Fan Builder extraordinaire Deborah Higdon ( featured in the LEGO Ideas Book ) will select a winning creation. Your kids can enter as often as they like with different creations.  Throughout the month we will be posting the photos on cn.dk.com/legopix as well as on our Facebook page and Twitter feed @DKCanada.

Send a photo of your LEGO creation ( don’t forget that you can enter as many times as you like with different creations ) to us at general@tourmaline.ca (jpgs only, no larger than 5 mb). Please include the headline For the Love of LEGO in your email. One lucky entrant will win a DK LEGO Book collection worth over $200!

For more details check out the Lego Boutique at DK Canada.

In the meantime, to discover the whole history of Lego and learn more about the famous bricks, don’t forget to grab a copy of the Lego Book (revised edition) at your favourite bookstore, even amazon.ca.

Disclaimer: Thanks to DK Canada for sending me the above mentioned book for review purposes. I was not monetarily compensated for this review. Please note that the review was not influenced by the Sponsor in any way. All opinions expressed here are only my own.

Posted by Canadianladybug at 7:51 AM