The Year Comes Round 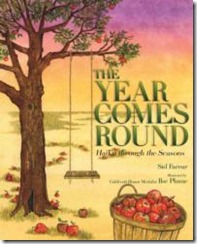 The Year Comes Round – Haiku Through the Seasons
Written by: Sid Farrar
Published at Albert Whitman & Company

Twelve nature-themed haiku accompanied by lush illustrations take the reader from January to December. A great way to introduce children to the traditional Japanese poetry form.

I was mainly interested in this book because of the Haiku style of the writing.   I was introduced to Haiku when my oldest son was testing a new writing curriculum last year.   And we loved it.   So when I saw that this book was written in an Haiku style I thought it would be a nice addition to our personal library.

Haiku is a poem written in a very particular way.   It is made of only three lines with a certain number of syllable for each of the lines (five for the first line, seven for the second and five for the third).  The book itself goes through the months of the year and illustrate the seasons as they go by.

The book is mostly geared for grades preschool to second grade but can be used for teaching all levels I think.   As an homeschool mom, I find it interesting when I find a book that illustrate and give example of various form of writings.  This book is simply done but is a marvelous example of what an Haiku is and how it can be adapted to many things.

For fun I wrote my own Haiku about the book

Of haiku and the seasons

For kids and parents

The Haikus found in this book is accompanied with beautiful images illustrating the time of the year presented in the poem.  At the end of the book, you will also get a page on what is an Haiku and some information about the seasons.

I would like to recommend this book to anyone wanting to introduce their kids to a fun way of writing poems.

The Year Comes Round is available at your favourite bookstore, even at amazon.ca or amazon.com.

Posted by Canadianladybug at 6:18 AM