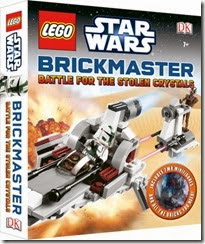 Star Wars® and LEGO® fans alike can join forces with Commander Gree to defeat the deadly commando droid. Including 180 bricks and two minifigures, LEGO® Star Wars® Brickmaster: Battle for the Stolen Crystals allows young fans to play out the thrilling four-part adventure story by building the models and taking them apart to build the next one.

Now with 80 pages, this all-new LEGO Star Wars brickmaster includes clear step-by-step building instructions along with an exciting new story where kids can experience the adventure through their creations.

I was looking forward to see a new Lego Brickmaster and recently I got the opportunity to get one to review.  The new Star Wars Battle For The Stolen Crystals is packed with adventures to build and live for your little Star Wars fan.   Your child will have to help Commander Gree to defeat the deadly commando droid.  He/she will be able to read the story, build the models while following the step-by-step instructions and play the adventure.

The book comes with over 180 bricks and two minifigures.  Clear instructions throughout the book will allow you to build four scenes containing two models in each one – Battle in the Canyons, Ambush in the Forest, Desert Atack, and Ice Mountain Chase. The child discovering this special package from DK will be able to build the V-19 Torrent, a speedy starfighter, a separatist cannon, a WT-RT walker, a Vespula Fighter, a desert speeder, a PH-STAP, a KD81 cargo skiff and an ice speeder.  The book also contains information on the vehicles, the characters, as well as tips on how to build with Lego.

I find the DK Lego Brickmasters to be a great purchase for kids.   The price is amazing and the book contains Lego bricks that will entertain your child.   Different models exists: Legends of Chima The Quest for Chi, Ninjago, Atlantis, Friends, Ninjago Fight of the Snakes, Pirates, Castle, Star Wars, and City.   I really recommend these special packages from DK as it offer quality blocks and reading at the same time.   I really look forward to new DK Brickmaster in the future and hope that new kits of Lego Friends will be offered in a near future.

I consider the DK Brickmaster sets to be a great gift for a birthday or Christmas.  They are affordable, contains Lego bricks and will provide some entertainment to the recipient of the gift.

The DK Lego Brickmaster Star Wars Battle for the Stolen Crystals is available at your favourite bookstore, even amazon.ca and amazon.com.

Disclaimer: Thanks to DK Canada for sending me the above mentioned title for review purposes. I was not monetarily compensated for this review. Please note that the review was not influenced by the Sponsor in any way. All opinions expressed here are only my own.

Posted by Canadianladybug at 3:51 PM