Battle Bands - Collect, Stretch and Destroy! In this easy-to-learn, quick-playing game, two players take turns attempting to score points by launching their Battle Bands at the Battle Mat. With over 70 bands to collect, kids will love collecting them all to battle or wear!

Senario does it again with another innovative product that is right on trend. 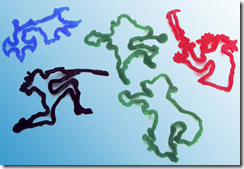 I must admit that I have mixed feelings about the whole craziness around the new trend that the kids are following these days.   Bands can be found everywhere and up until now they only thing  you could do with them were 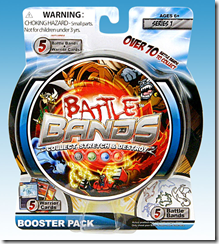 to wear them and trade them.

But here comes a new twist to the “band” collection craze….  Battle Bands are now on the market and you can play with them!

The Battle Board is a fun way for the boys in your family to battle their bands against each other.  Points are assigned depending on where the band has landed on the board as well as the type of band it is.   There are four category of bands: water, earth, fire, and the rare “black band”.

My boys are all about battles so I am pretty sure that they will enjoy playing with the Battle Bands.   I can see them competing in the living room during and afternoon.    I am almost certain that their little sister will join the fun.   My only concern would be the fact that we find that the bands might break easily.    The other day, my husband was showing them how to stretch bands and let them go (like elastics) but in his demonstration he broke the ape band of our daughter.  She wasn’t too happy about it.   Kids tend not to realize how strong they can be and I suspect that some bands will find their way to garbage city…  Nevertheless, I think they will have fun with the Battle Bands and fighting against each other. 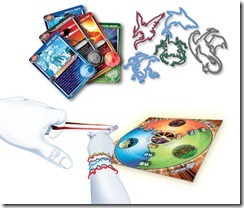 The packs can be found at Walgreens, Rite Aid, Target, Trans World Entertainment and Fry’s Stores throughout the US.

For more information go to http://www.playbattlebands.com/.

Disclaimer: Thanks to Senario and Dittoe Public Relations for sending me the featured products for review purpose. I was not monetarily compensated for this review. Please note that the review was not influenced by the Sponsor in any way.  All opinions expressed here are only my own.

Posted by Canadianladybug at 2:24 PM