A fascinating encyclopedic reference on rocks and gems, including their identification, composition, and their use. The many feature boxes cover topics such as the Malachite room in the Winter Palace and the collection of the Hope Diamond and the superstitions surrounding it.

Since our trip to the Science North in Sudbury last year (Sept 2010), my oldest son has been fascinated with rocks.    He once mentioned that it would be nice to have a book on rocks so he can learn more about it.   *grin*   He doesn’t know that I have this gem of a book in my hands as I write this.

While at the museum, the kids registered themselves to the science section to learn how to polish rocks.    Each of them worked hard to make their rough rock become a polished one – one so smooth to the hand and nice to look at.  They liked the activity so much that they went back to it on another day. 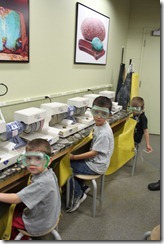 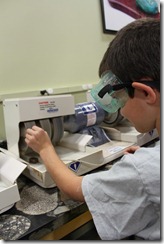 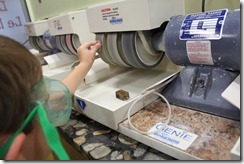 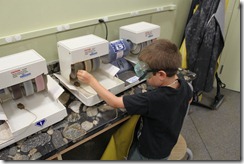 But participating to this simple yet fun activity, the curiosity of my kids was picked.   And everywhere they go now, they pick up rocks and show them to me.   We even got some slag – left of rock from the nickel extraction – from my husband’s uncle who used to work in the mines in Sudbury.

My oldest son, who is ten, keeps asking for a book that will give him more information about rocks.   Well let me tell you that the Smithsonian Rock and Gem is the book for him!   This book will give him all the information he needs to learn more about rocks and gems.    He already started his little collection of rocks.    I suspect that he will enjoy digging into this book to learn more about the different rocks and gems from around the world.

The books chapters are:

Though I will admit that some of the information is not Christian based, I believe it is necessary for my children to be exposed to both side of the coins in the theories circulating out there.   I want my kids to be fully prepared for when they arrive in college/university so that they can stand firm in their beliefs and be able to defend their faith.

Each rock/gem presented in this book is done so with detailed information about it.   Images always accompanied the text and you will be able to compare your own rocks/gems in your collection with the photos included in this book.  You will also discover where the rock/gem can be found around the world.

The Smithsonian Rock and Gem is available at your favorite bookstore, even amazon.ca.

Disclaimer: I received the product for review purposes. I was not monetarily compensated for this review. Please note that the review was not influenced by the Sponsor in any way. All opinions expressed here are only my own.

Posted by Canadianladybug at 2:00 PM