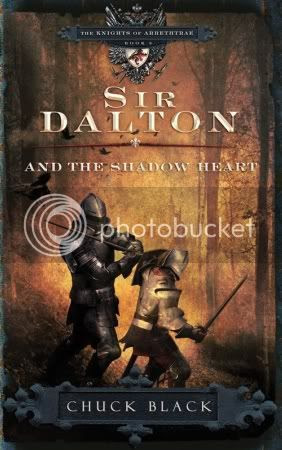 The shadow of doubt can destroy the most noble of men. Can Sir Dalton rediscover his allegiance before it’s too late?

Sir Dalton, a knight in training, seems to have everything going for him. Young, well-liked, and a natural leader, he has earned the respect and admiration of his fellow knights, and especially the beautiful Lady Brynn.

But something is amiss at the training camp. Their new trainer is popular but lacks the passion to inspire them to true service to the King and the Prince. Besides this, the knights are too busy enjoying a season of good times to be concerned with a disturbing report that many of their fellow Knights have mysteriously vanished.

When Sir Dalton is sent on a mission, he encounters strange attacks, especially when he is alone. As his commitment wanes, the attacks grow in intensity until he is captured by Lord Drox, a massive Shadow Warrior. Bruised and beaten, Dalton refuses to submit to evil and initiates a daring escape with only one of two outcomes–life or death. But what will become of the hundreds of knights he’ll leave behind? In a kingdom of peril, Dalton thinks he is on his own, but two faithful friends have not abandoned him, and neither has a strange old hermit who seems to know much about the Prince. But can Dalton face the evil Shadow Warrior again and survive?

Who is Chuck Black?
Chuck Black, a former F-16 fighter pilot and tactical communications engineer, is the author of nine novels, including the popular Kingdom series. He has received praise from parents across the country for his unique approach to telling biblical truths. His passion in life is to serve the Lord Jesus Christ and to love his wife, Andrea, and their six children. He lives with his family in North Dakota.

My Thoughts
I am 100% sold out for this author. He’s penmanship is just fantastic and brings the story of God in a Middle Ages setting. Brilliant! It is perfect to attract young people and make them think. In fact, I am planning to get the Kingdom Series as well as the two first books from The Knights of Arrethtrae series. This book is in fact the third book of The Knights of Arrethtrae series but you can easily read it as a standalone.

The whole theme behind this book is faith vs. doubt. Another lesson from the book would be how we must protect ourselves from false teaching and stand up for the truth. While we are transported to the medieval time, we also travel with Sir Dalton and other characters as we fight the enemy in Arrethtrae. The author seemed to have researched the medieval times to picture the fighting scenes and the equipment used.

The book is packed with adventure and mysterious disappearances as well as great lessons. I had trouble to put down the book while I was reading it. Coming from a book primarily geared for youth and teenager, I think this is a strong bonus. But honestly, anyone in the family could read it. I could even see the books of Chuck Black being used as read-aloud sessions.

At the end of the book, you will also find some discussion questions. As a homeschool mom I can see myself reading this with the kids (when they are older right now their ages range from 17 months to almost 8 years old) and sit down with them and go through the questions. Each chapter has its own series of questions. In a separate section, you can verify your answers and compare with the answers from the author. Finally, the author himself explains his passion for writing this book like this:

“My passion, as conveyed through Sir Dalton and the Shadow Heart, is to reveal the dangers of allowing doubt and unbelief to become a stronghold in the heart of a young person and to encourage him or her to strengthen faith through the overwhelming evidence in creation.”

If you loved the Narnia series from C.S. Lewis or Lord of the Rings trilogy from Tolkien, I seriously think that you would enjoy the books from Chuck Black. As for us, I am putting the rest of the Knights of Arrethtrae series and the Kingdom series on our wish list. These are definitively books that I want my family to read.

You can find Sir Dalton and the Shadow Heart at any good bookstore and even online on amazon.ca and indigo.ca.

Posted by Canadianladybug at 7:08 AM