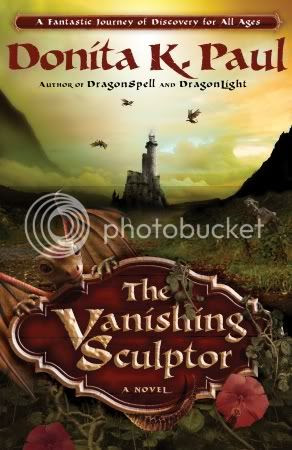 
About the book
Donita K. Paul’s 250,000-plus-selling DragonKeeper Chronicles series has attracted a wide spectrum of dedicated fans–and they’re sure to fall in love with the new characters and adventures in her latest superbly-crafted novel for all ages. It’s a mind-boggling fantasy that inhabits the same world as the DragonKeeper Chronicles, but in a different country and an earlier time, where the people know little of Wulder and nothing of Paladin.

In The Vanishing Sculptor, readers will meet Tipper, a young emerlindian who’s responsible for the upkeep of her family’s estate during her sculptor father’s absence. Tipper soon discovers that her actions have unbalanced the whole foundation of her world, and she must act quickly to undo the calamitous threat. But how can she save her father and her world on her own? The task is too huge for one person, so she gathers the help of some unlikely companions–including the nearly five-foot tall parrot Beccaroon–and eventually witnesses the loving care and miraculous resources of Wulder. Through Tipper’s breathtaking story, readers will discover the beauty of knowing and serving God.

Who is Donita K. Paul?
Donita K. Paul is a retired teacher and author of numerous novellas, short stories, and eight novels, including the best-selling DragonKeeper Chronicles, a series which has sold more than a quarter-million books to date. The winner of multiple awards, she lives in Colorado Springs, Colorado, where she spends time mentoring and encouraging young writers.

My Thoughts
For me the Vanishing Sculptor was challenging to read. Oh! I loved being transported to a different world where you have dragons and other creatures. But somehow, the way the story was written didn’t help me to stay focused. I did read the whole book because I am not the kind of person who would just leave a book unfinished but I doubt that I would go out and buy the other books from Donita. I’m sure other people loves her stories especially the DragonKeeper Chronicles but reading the Vanishing Sculptor didn’t sparkle my interest to the point of investigating more this author.

This is a land where dragons live– dragons who speak in your mind if you are incline to listen to them. It is an interesting concept which has been used many times in other novels with dragon characters. I sense a fad in this kind of novels. You find them everywhere from secular authors to Christian authors and passing by even homeschoolers who write. People are attracted to these novels a lot possibly because of the mystic surrounding the beasts. It nice to know that Christian authors like Donita exploits this kind of literature as well.

What I found in the novel that I have just read is that even the mention of God in it is not so clear. I would have found it more interesting if all reference to him, as Wulder, would have been more evident at times. Some characters were interesting though – I’m thinking of Beccaroon – the great bird. I would love to see how Hollywood would depict him. As well as the emerlidians who are born pale with white hair with pale grey eyes and as they age they darken. Even the dragons – big and small ones – would be quite a sight on the big screen. Honestly, even though the reading was slow for me I wouldn’t mind seeing a movie done from this book.

What I also like from the author is that she took the time to present all the people and give a glossary at the end of her book. The glossary is especially interesting as we present the various races, plants, instruments and so on that is in the novel.

If you are a big fan of fantasy, I would suggest this book. It is packed with events related to the quest the main characters are trying to complete. However, I have a feeling that even though this story is from an earlier time and in a different country than the DragonKeeper Chronicles the reader would benefit from reading that series first.

The Vanishing Sculptor is available everywhere even at amazon.ca and indigo.ca.
Posted by Canadianladybug at 7:07 AM