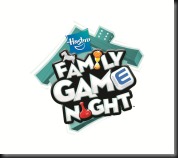 Family Day is a statutory holiday occurring on the third Monday in February.   During the Ontario provincial election in 2007, eventual winner Dalton McGuinty of the Liberal Party promised that if re-elected premier he would establish a provincial holiday in February. On 12 October 2007, the provincial government established Family Day with the first being observed on 18 February 2008.  Since then, we have a special day off all over the province.  This year (2011), the Family Day is on February 21st.  So my question today is how do you plan to spend the day with your family?

Many activities are organized everywhere, museums are open and fun can happen outside or inside the home.

We are planning to go visit the Canadian Museum of Civilization in the morning (with our free membership I got through LivingSocial).

In the late afternoon/evening, we will play a game.  Which one?   The brand new version of Pictionary which I have just received to review from Hasbro. 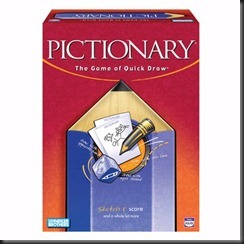 Year after year since 1985, PICTIONARY proves itself to be the ultimate party game. In this quick-draw classic, the sketches draw loads of laughs…and the guesses can be even more hilarious! Roll the 6-sided Challenge Die for extra-silly scenario, and you’re guaranteed that no two games will ever be alike!

In this quick-draw classic, the sketches draw loads of laughs . . . and the guesses can be even more hilarious! Roll the six-sided challenge die for extra-silly scenarios -- no two games will ever be alike! Play in teams, large or small, and you're sure to find that a picture really is worth a thousand hysterical words! " Hilarious game of quick-draw is sure to keep you guessing as players sketch their best to move around the game board and win! " Game includes game board, one-minute timer, 4 pencil pawns, 4 pencils, 4 pads of paper, card box, card deck, standard die and challenge die, and instructions. " For Adult players.

When I got the game into my hands, I immediately read the information on the box.    And the first thing that struck me was the year 1985.   Has it been so long already?   Feels as though Pictionary came out yesterday but no it was when I was 16 years old!  Wow!  I can hardly believe it…

Then I decided to compare it with our “old” game of Pictionary.   First I realized that the box is smaller than it used to be.   Also the game board is different – not only in size but with the designs on it too!    While going around the board, you can land on one of the five squares; all play, action, object, difficult, person/place/animal.  So far so good as it is pretty much the same as the older version.  However, this new Pictionary game has a twist called the challenge die.   This little die will add more fun in your game.   If you decide to be challenged with the special die, you have to roll it before starting your play.   The die has five different challenges: none ie you play normally, off hand which means that you use your off hand to draw the picture (for example if you are a lefty like me, you will use your right hand to draw – isn’t it challenging enough already?), eyes closed which means you have to close your eyes to draw, on line which means that the pencil can’t leave the paper once it is on it, and two images which gives you will have to draw one picture for the normal category you are on and one picture for the ALL PLAY category.    Another twist to the game is the fun phrases cards that are included in the package.   These cards will be common phrases that you will have to draw and your team to guess.     There are 20 fun phrases cards in the package.

Having the two new ways of playing is definitively adding more fun into the game.    The reactions that you will get when you are getting one of the challenges will be memorable to say the least.    And if you feel like it, you can take pictures of the drawing of your kids to keep a memory of their performance.   And the bonus that this game is bilingual is fabulous.    Being a bilingual family, I like the fact that I can chose to play either in English or French.

Honestly I can’t think of a better game that will stretch you and encourage you at getting better in your drawing skills.    We played with our older version in the past with the kids – making two teams with one adult in each team.    The kids had a good laugh as much as the parents.    The two oldest understood it probably better than the younger ones.   It might be awkward with the younger kids because they are not skilled enough to draw but by being flexible on the rules, you can still have fun.   And there is even a Pictionary Junior version if  you prefer going with that! 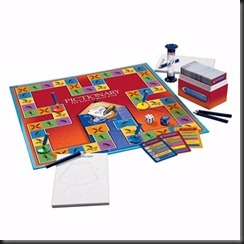 To see a demo of the new Pictionary go to Hasbro special page .

Create lasting memories by hosting your family game night.    Get some wonderful ideas on the Host Your Own site.  You will be to get some tips and a quick guide to organize your special night.  You can even find some recipes that everyone in your family would enjoy from snacks to desserts.   You can also print a fridge pool, reminders, tournament sheets, enhanced play cards, winner certificates and prize pack rewards!   I’m telling you Hasbro has thought of everything to make your Family Game Night fun and interesting.  You are egeared for success with these ideas…

What are you waiting?  Plan your Family Night Game today to be ready for the Family Day holiday on Feb 21st! 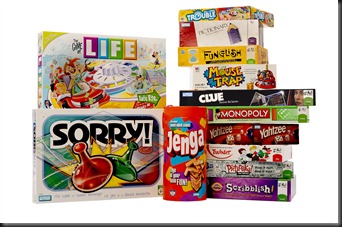 Looking for tips on how to put a Family Game Night?   Check out the special facebook page on the subject!

Check out Hasbro for ideas of games!

Disclaimer: Thanks to Hasbro Canada for sending me the above mentioned product for review purposes . I was not monetarily compensated for this review. Please note that the review was not influenced by the Sponsor in any way.  All opinions expressed here are only my own.

Posted by Canadianladybug at 1:21 PM