May 4th is a great day for comic lovers as the new Avengers movie is coming out in theater.   After seeing Iron Man 1 & 2, Hulk, Thor and Captain America in the past few years, the day is finally coming where we will see these heroes uniting together on the big screen for the first ever Avengers movie!

Can you tell that I am excited?

Both my husband and I have been following the development and the various super-heroes movies since it all started – Spider-Man, Superman, Batman, Iron Man, Hulk, Thor, Captain America, X-Men.   We’ve seen them all.   We have our favorites obviously but since we read the comics we looked forward for each and every single one of them.   But we are very impressed with the quality and the stories we have seen so far in the newer Marvel movies and we are anxiously waiting for the Avengers movie to come out because we just know that it will be unbelievable.

To celebrate the coming out of the new movie, Hasbro has numerous new toys based on the Avengers movie.   Toys that will be a delight for little boys as well as big boys.    My husband was very curious to see what I had in the package to review. 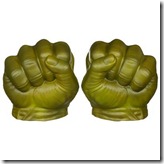 Feel just as powerful as your amazing MARVEL THE AVENGERS hero, the HULK, with these amazing Gamma Green Smash Fists! When you put these green hands of power on your own hands, it will be that much easier to imagine yourself smashing everything that gets in your way! With a HULK hero mask (sold separately), you can be even more like the muscle-bound green hero. Get into the best HULK action ever with your Gamma Green Smash Fists!

My first thought when I held these fists was that would be fun to pretend fighting with another person.   These soft green fists are easy to put on and won’t hurt someone when you punch your adversary (well depending of where you punch I guess!).    These fists could also complete a HULK costume through it would be hard to carry your Halloween bag around because you can’t open them up.       Still I find these fists interesting as it could provide quality time fighting with dad in the living room whenever both parties are interested. 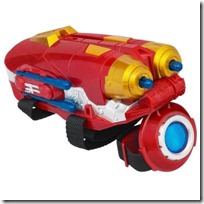 Arm yourself with this super-powered TRI-POWER REPULSOR blaster, just like the legendary IRON MAN hero! Sneak up on your enemy, then immobilize him with your blaster’s pulse lights and launch sounds as you fire away with missile after missile! Re-load and move on to your next target. The future of the world is in your hands!

This fun toy will launch missiles, send blast sounds and illuminate with pulse lights.   This item will also complete you Iron Man costume for Halloween this year.    The lights are motion-activated and all your child has to do is press to lauch the missiles.  Four missiles are included and you should expect searching for these whenever they are lost.

My only concern would be if you child is not careful and shot the missile in the eye of someone else.   That wouldn’t be fun.   So I strongly suggests parents to explain the consequences of not using the toy properly and to determine when it is a good time to use it.   I prefer prevention over going to the emergency with a child because of a missile in an eye. 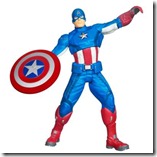 The unbeatable CAPTAIN AMERICA has returned from decades frozen in suspended animation to find a world unlike any he ever imagined. The one thing he does understand is that the planet remains in peril, and that it is up to him to protect it. He hurls his shield with uncanny accuracy to scatter his foes, and charges into battle with the same ferocity as ever before.

This detailed CAPTAIN AMERICA figure puts you right into the heart of the battle for the future of the planet. Hear your hero intimidate the enemy with battle cries and combat sounds. He won’t back down in the starkest of circumstances. Pull his arm back to send his shield flying, and let the enemy know he will not accept defeat.

This figure is marvelous.   The size is perfect to play with the little sister and her dolls.   Big brother will become the hero in her heart for sure!    This figure comes with a shield that can be thrown to rescue the dolls.   All you have to do is pull the arm back and release it to sling the shield.    Also if you press the belt of the Captain America you will hear a variety of sounds as well as “Captain America”.   This figure is perfect for boys ages 4 and up.   Even collectors might be interested in this figure to put with their comic collection.

Again the only concern I might have for this figure would be where the shield would go once released.   However, in this case the item is bigger than the missiles in the previous toy. 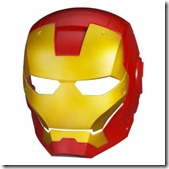 Make superhero action “come alive” with these awesome AVENGERS masks! When villainy rears its ugly head and you’ve got to save the day, put on your mask to feel just like your favourite AVENGERS hero. With a comfort-padded eyepiece and details that make these masks seem just like the real thing, you’ll want to wear it all the time — or at least until your evil enemies are defeated!

Each mask sold separately. Styles may vary.   Also available are the Thor mask, the Captain America mask and the Hulk mask.

This mask is made of sturdy plastic and has a velcro piece attached at the back of it.   It is easy for the child to put it on and the remove it whenever he feels to play with it.    The only negative point I might have is that the piece of plastic that make out the eyes can put marks on the face of the child when it is used.   The face comes back to normal within about 20 minutes or so but if it is too tight on the face, it will leave marks.   So make sure that it is tight enough to hold on the head but not too tight at the same time.    We know this by experience with the masks we already have which are the Thor and Captain America ones.

It's your favourite MARVEL Super Heroes like you’ve never seen them before! These figures look just like the same heroes you’ve always admired but they have different enemies, and that calls for a whole new array of weapons to add to their arsenal. They’re ready for anything and will definitely help you take your battles to the next level!

Each figure is sold separately and comes with accessories. Styles may vary.

I’ve received four different MARVEL Super Heroes figures the 3.75” format. -  Heavy Artillery Iron Man, Shield Launcher Captain America, Shock Strike Thor, and Cosmic Spear Loki.   With the new Avengers movie coming out I know that the kids will have a blast playing with their figures and pretending to fight Loki.   I’m glad we got one bad character in the pack I have received because usually the boys always received the heroes.    Each character has tricks under its sleeves.  Loki possess snap-out blades, Thor can launch his hammer, Captain America will launch his shield and Iron Man will launch missile.    Prepare for reenactment in your living room when these heroes fight Loki to prevent him to take control of the world.

I am quite impressed with the variety and the quality of the new toys from the Avengers line at Hasbro Canada.   I know that little and big boys (dads!) will have fun playing with them.

You can find the above mentioned products as well as many more at your favourite toy store.

Posted by Canadianladybug at 4:09 PM