A Year with Aslan 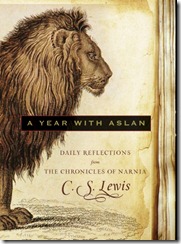 A Year with Aslan – Daily Reflections from the Chronicles of Narnia
By C.S. Lewis
Published at HarperCollins

For more than fifty years, the world C. S. Lewis created in Narnia has captured our hearts and imaginations. Both children and adults have discovered that rereading the books leads to entirely new experiences and insights. In the midst of these breathtaking stories of adventure, betrayal, and discovery in a magical land are profound messages about the true meaning of life. Whether it is Eustace struggling with his dragon skin, Digory debating obedience to Aslan versus saving his mother, or Edmund facing his shame after his rescue from the White Witch, the questions and dilemmas facing the characters are surprisingly relevant to us today. By pondering the world of Narnia, we better understand our own.

In the first book of its kind, A Year with Aslan offers 365 of the most thought-provoking passages from all seven books, paired with reflective questions that get at the heart of what matters most. An unprecedented way to experience the magic of Narnia every day of the year, A Year with Aslan allows us all to go “Further up and further in!”

(1898-1963) Clive Staples Lewis was one of the intellectual giants of the twentieth century and arguable the most influential Christian writer of his day.  He was a Fellow and Tutor in English literature in Oxford University until 1954 when he was unanimously elected to the Chair of Medieval and Renaissance English at Cambridge University, a position he held until his retirement.  His major contributions in literary criticism, children’s literature, fantasy literature, and popular theology brought him international renown and acclaim.  He wrote more than thirty books, allowing him to reach a vast audience, and his works continue to attract thousands of new readers every year.   His most distinguished and popular accomplishments include The Chronicles of Narnia, Out of the Silent Planet, The Four Loves, The Screwtape Letters, and Mere Christianity.  Visit the author online at www.cslewis.com .

Here’s an interesting book for die-hard fans of C.S. Lewis.   Each day of the year includes a reading from one of the books in the Chronicles of Narnia as well as thought provoking questions that will guide you in reflecting on your own life.

When I realized that this book was on the market, I was excited.   We love the Chronicles of Narnia in our household.   Two years ago, we listened to the stories while we were driving with our RV through the states  and provinces of PA, MA, ME, NB and PE.   The kids discovered exciting stories and loved hearing more about the characters as we were going through the books.

Having a book that will bring you daily reflections from the beloved series is priceless.   It gives you a new perspective as you also  have to answer questions after each readings.    The readings follow the calendar dates.  However, I am sad to realize that February 29 is not included in the book (remember we get it once every four years).    I personally think it would have been good to have this date included just in case someone goes through the book on the year where we get it.   Somehow, I find many books on daily reflections or daily devotionals seem to forget about this day.

The map of the land of Narnia is also included in the cover of the book.    As a homeschooler, I am currently thinking of using this book as part of a discussion with my kids on a daily basis during 2011.    It would be wonderful to go through it with my kids and get their insights on the questions asked after each reading.

If you love C.S. Lewis and the Chronicles of Narnia, this book would be a wonderful addition in your house.   And since Christmas is coming, you can put it on your wish list!

This review was possible because I received a copy of A Year with Aslan from HarperCollins.

A Year with Aslan is available everywhere even amazon.ca.

Posted by Canadianladybug at 4:21 PM