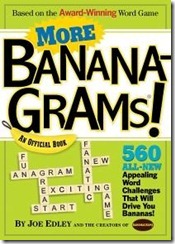 Joe Edley, the wordplay genius who created the puzzles in Bananagrams, now steps it up in More Bananagrams! by creating eight new joyously mind-bending puzzle types, and adding another level of difficulty—puzzles with a five banana (super hard!) rating. In all, there are over 500 original new anagram puzzles, including Banana Splits (solve letter substitution scrambles in rapid-fire fashion), Banana Peels (add new letters to words and rearrange to spell something new), Banana Boats (evolve a chain of words, one new letter at a time), intersecting words, vowel replacements, adjacent letter scrambles, and much more. The puzzles are rated one banana (simplest) to the fiendish new five banana, and enriching supplementary material is featured, including fun banana facts, helpful word lists, and, yes, an answer key.

If you are looking for a book containing word games to help you develop more vocabulary or simply to have fun with words, you definitively need to check out the More Bananagrams! book.    Based on the award-winning word game Bananagrams! this book contains 560 all-new appealing word challenges to stir-up your brain cells.

The book begins with a story of Bananagrams! and a quick how to play page.    The beginning of the book also presents some weords which are strange and useful words that will help you play Bananagrams! as well as variations of the original game to help you develop more skills with the real game.

Having said that, let me present you the different word games included in this book:

This book is quite small and can easily by inserted in your purse or luggage.   I can see it to be useful while waiting for an appointment, in an airplane or simply to pick your brain a bit on vacation.      It is perfect to stretch your thinking cells, to broaden your vocabulary whether English is your first language or not as well as practice resolving problems.   If you are the type of person enjoying word games, I think this book will be of interest for you.

More Bananagrams! is available at your favourite boosktore, even amazon.ca.

Posted by Canadianladybug at 10:58 AM