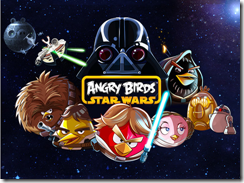 Did you know that since November 8th, you can now purchase and download the new Angry Birds Star Wars game?   Yes it is true that a new Angry Birds game has arrived.  For the iPod and the iPad, you can play the highly addictive game with a Star Wars twist.   I am one of the numerous fans who purchased it on the first day.  And guess what – the game is FANTASTIC.

Now this post is not about the new game but more to highlight a new line of toys from Hasbro Canada based on this new video game.   We received the Angry Birds Star Wars Jenga Death Star Game. 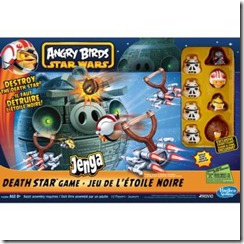 Get ready for an intergalactic battle with ANGRY BIRDS Star Wars when you and a friend take on DARTH VADER and his porky pals! Take turns trying to topple the Empire with this awesome JENGA DEATH STAR game. Load your X-WING FIGHTER launcher with your LUKE SKYWALKER, HAN SOLO or CHEWBACCA birds for an epic squawk attack against the DEATH STAR. Which one of you will knock the DARTH VADER and STORMTROOPER pigs’ block off and bring the DEATH STAR crashing down? There’s only one way to find out!

One day while at the Wal-Mart near our place, two of my kids saw this game on the middle of the aisle and were totally excited about it.   They took the box to check out the price in the hopes that I would buy it.   Unfortunately for them, we are not the type of parents who will purchase something right away.   So they left the box and were telling me that they would hope to get it for Christmas or  their birthday (one of which is in November and the other one in February!)   When they got back inside the truck, they quickly told their siblings and their dad about it. 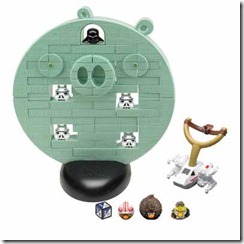 What they didn’t know is that I knew I would receive it to review…   And when I received it, I was quite excited about it.   I think I am worst than the kids when it comes to Angry Birds…   As soon as the new app – Angry Birds Star Wars – was out I purchased it for the iPad.    This particular app is my favourite so far as it is so out-of-the-ordinary.   So I was delighted to see that Hasbro Canada came out with numerous games based on this new app from Angry Birds!

We received the Death Star Jenga Game which is a different way to play Jenga to be honest.   No pulling the block away to get the pigs stumbling down.    No this time, you have a launcher space ship and birds to throw at it in order to destroy it.   I applause the creativity of the design team of the game because it is well thought and will bring tons of pleasure and laughter in the kids.    Along side with the three birds (Han Solo, Chewbacca, and Luke Skywalker bird’s version), you also get five pigs version of stromtroopers and Darth Vader.

The game is well done and will be a big hit this Christmas if you decide to purchase it.  It is a fun variation of the regular Jenga Game and incorporates popular characters on fun app games that you can easily download on your iPhone, iPod or iPad.

The Angry Birds Star Wars Jenga Death Star Game is available at your favourite toy store, even on amazon.com.

You can also get the other games based on Angry Birds Star Wars on amazon.com as well.

Posted by Canadianladybug at 8:11 AM